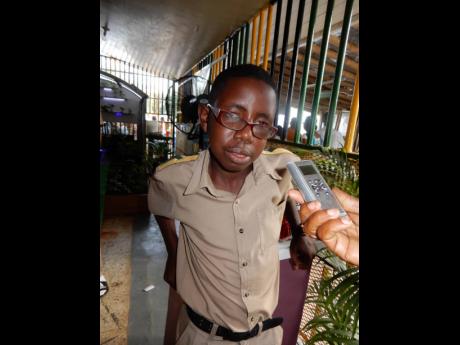 Her pride stems from the challenges her 14-year-old son had to overcome to be at the place he is now.

In 2012, at age seven, he spent a little over five months hospitalised at The University Hospital of the West Indies and was later admitted to the Denbigh Hospital – all this as she dealt with the fact that her son lost his sight in his right eye and his hearing in the left ear.

To see him sharing in the glory of the team, which copped the award for being Most Innovative as well as first place for its Remote Irrigation Vehicle , a machine used to make life easier on the farm as it can water crops and spray insecticides without a farmer being physically present.

Anderson, who stood with the team at the William Shagoury Pavillion at the 67th staging of the Denbigh Agricultural Show, said she admired her son’s fighting spirit.

“His illness has never stopped him. He lived for school. He never wanted to stop from classes, and when he went to Vere Technical, he was immediately taken with the robotics class,” his mother shared.

Scarlett, with a smile brightening his face, said robotics was everything to him and he thoroughly enjoyed it. For him, it is a chance to get creative.

Speaking with the teen, it was easy to guess at his optimism and zest for life.

Scarlett said there was a time when he thought that of himself and it got him down, but after seeing where he is coming from, those negative emotions are a thing of the past.

Reaching out to those who might have similar challenges, he said they should learn to uplift themselves.

“Don’t allow anyone to put you down, and if you allow their words to affect you and you believe them, then you cannot be uplifted,” he said with wisdom that seemed beyond his years.