Contractor on $8.4B Rhyne Park housing project assures 70% J'can labour to be used 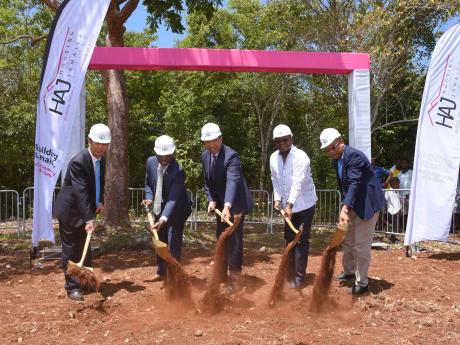 The contractor on the $8.4 billion Rhyne Park housing development in Rose Hall, St James has given the assurance that Jamaicans will make up at least 70 per cent of the workforce to construct the 754 houses earmarked for the project.

According to general manager of Henan Fifth Construction Group Company Limited, Baoguo Chen, the project will “promote job creation and the development of the Jamaican construction industry”.

The project is being undertaken by the Housing Agency of Jamaica (HAJ) under a joint venture partnership with the China-based Henan Fifth Construction Group Company Limited over a three-year period.

The 96-acre development is intended to respond to the housing needs of low to middle-income earners in St James, as well as persons employed to the attractions and accommodations sector.

Prime Minister Andrew Holness, who officially broke ground for the start of construction, said the development is evidence of the Government's commitment to providing affordable housing solutions for Jamaicans.

“So, we are not just talking about it. We are building the houses, we providing the financing and we are reducing the transaction costs to allow you to own your own home. Owning your own home in Jamaica has never been easier,” Holness said.

He said that the technology to be employed in undertaking the development will ensure durability of the units, and will take into account the terrain and climate, as well as allow for expansion.