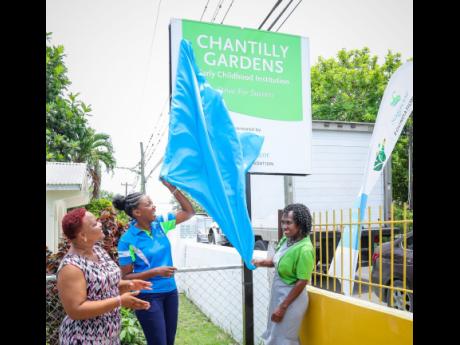 Contributed
Sharon Cummings (right), principal of the Chantilly Gardens Early Childhood Institution, is a picture of glee as she unveils the new signage for her school during the official handover of the newly done upgrades to the school by the Sagicor Foundation. 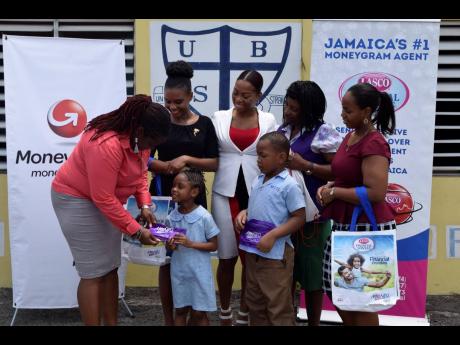 Recently, there has been much discussion on the quality of Jamaica’s education system, given the results from the just-concluded Primary Exit Profile. However, one important area often neglected in the national discussion about education is the quality of our country’s early-childhood institutions (ECIs).

It is accurate to assert that early-childhood education is grossly underfunded in Jamaica, a fact that has numerous consequences for our nation’s children. This stark neglect of our early-childhood institutions is illuminated when examining the 2019-2020 budget estimates.

Moreover, as of last year, the Early Childhood Commission (ECC) has only certified a mere 122 out of the country’s 2,700 ECIs. Additionally, only 32 per cent of teachers operating in Jamaica’s ECIs satisfy the minimum required qualification of a diploma from a teacher-training institution. That is just over 3,400 of the 10,000 teachers employed. This results in not only sub-standard education being transferred but also teacher frustration.

The underfunding of critical infrastructure in ECIs has also led to the creation of unsuitable learning environments for children. Chairperson of the ECC Trisha Williams-Singh noted that many ECIs have more students than recommended, resulting in high student-to-teacher ratios and crowding of even bathroom facilities.

In some cases, even adults might share restrooms with children due to the lack of facilities. This deprivation further contributes to schools failing to provide health personnel and equipment for even basic first aid. There is numerous anecdotal evidence to support this observation.

This lack of critical infrastructure is also coupled with limited oversight. As quoted by UNICEF in its 2018 Situation Analysis of Jamaican Children, “The Early Childhood Commission is expected to monitor early-childhood institutions to ensure compliance with the law. However, the commission’s inspection department is severely under-resourced; at full capacity, the commission has one inspector for every 70 ECIs; however, the commission has been operating at 65 per cent capacity and, as a result, the already strained ratio has worsened to one inspector to every 108 early-childhood institutions.”

Unregistered institutions with weak oversight, very few trained teachers, and limited facilities is a problem as our most vulnerable and impressionable minds are receiving a limited educational foundation. Therefore, as we celebrate International Youth Day, priority must be placed on providing a solid base for our nation’s children, and it starts with a dream.

David Salmon is the outgoing deputy head boy of Wolmer’s and founder of the New Jamaica Foundation, a think tank and outreach organisation. To send feedback, he may be contacted at davidsalmon@live.com.