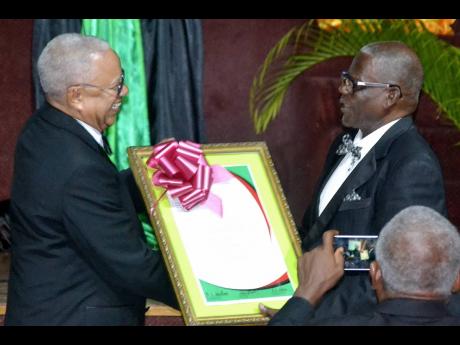 Seemingly brushing aside the saying, a king is without honour in his own land, Advanced Integrated System’s (AIS) CEO Douglas Halsall returned to the parish of his birth, St Ann, after 49 years away building a legacy, to be honoured by the St Ann Homecoming and Heritage Foundation.

At the foundation’s annual awards banquet, held Saturday night at Jewel Dunn’s River Beach Resort and Spa in Mammee Bay, St Ann, Halsall picked up the individual recognition award for his years of service to the information technology sector.

He was touched by the presentation of the award, even as he, in his humility, seemed to question his own worthiness of the recognition, as he spoke with The Gleaner.

“They think that I have represented the parish well,” said Halsall, who has been hailed by the media as Jamaica’s top information ­technology magnate.

“I said they think because to be honest with you, when you’re passionate with what you do, it doesn’t feel like work, and when you’re honoured you sometimes hesitate, say, whether you’ve earned it or not because you wake up every morning anxious to do what you do, and so achievements come as a consequence of that pattern.”

Halsall, who hails from Brown’s Town, St Ann, left for Kingston in 1970, and within a few years started what would later become a revolution in information ­technology in Jamaica.

After serving as CEO of National Cash Register for 10 years, Halsall founded AIS in 1987 and has since led the company to many firsts in Jamaica. He reminisced on some of the memorable ones.

“Although we introduced computers to government accounting and to the credit union, (installed) the first ATM in Jamaica, computerised the first hotel in Latin America, the Pegasus and all that, I think that my greatest achievement was introducing computer science to high schools,” Halsall disclosed.

That and the upgrading of The University of the West Indies to modern computing standards are deemed the two most important tasks undertaken by AIS, he said.

Asked if he is satisfied with his achievements over the years, Halsall responded: “Yes, but you know, it’s like a milepost, it eventually gets behind you and then you set new goals.”

Going forward, these “new goals” include completing the ­digitisation of The University Hospital of the West Indies and the introduction of mobile money, a project to be carried out in partnership with the National Commercial Bank.

The citation in his honour, read by Opal Scott, senior librarian at the St Ann Parish Library, in part, hailed Halsall as a “creative genius and successful entrepreneur” who has inspired thousands with his philosophy, ‘Go not where the path may lead, go instead where there is no path, and leave a trail.’