We cannot save everything – heritage trust archaeologist 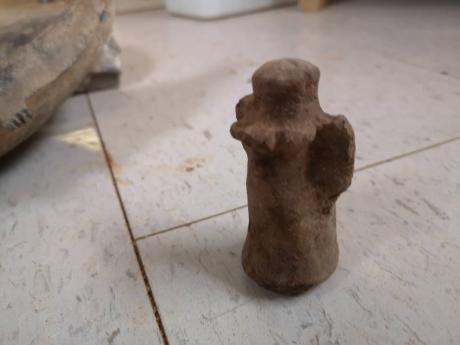 Jamaica National Heritage Trust (JNHT), the organisation charged with the preservation of the island’s heritage, has said that not all sites where artefacts are found can be secured.

Following the recent find of Taino remains and artefacts in Hellshire Hills, St Catherine, there have been concerns among members of the public about why the site has not been declared a protected site.

The Zemi, bones and fragments of pottery which have since been curated by the JNHT were found by an Israeli miner, contracted by Gore Developments as manager for the quarry.

Selvenious Walters, JNHT technical director of archaeology, explained that when a report of finds is made, the archaeological department responds at the earliest possible time.

Walters said that in the case of Hellshire, which is considered a hill run, the JNHT “responded the next day because we were out on a project on the day the call came in”.

He said an initial visit of a reported site is conducted and if further clarification is needed, a second site visit is arranged to do an evaluation, which may include excavation of the area.

Based on what is reported, the technical director makes the call on the area, but if the situation is significant, a report is prepared and sent to the board of trustees for a decision to be made.

“We have to make a determination as to what is significant and at what level of significance is the archaeological asset. Is it something that is valuable in terms of research or aesthetics or historical value?”

According to the archaeologist, the rock shelter had an isolated burial and was not significant enough for the trust to preserve it.

“The evaluation showed that there was nothing further to be gained from the cave (rock shelter) in terms of research material. There was no cave art or anything of the sort so the determination was made that this shallow cavity would not be something of national significance for us to protect, because the fact of the matter [is that], we have to make a decision in the context that we cannot save everything,” Walters told The Gleaner.

Walters added that he has encountered similar cavities in the Hellshire hills, with multiple complete and secondary burials, and these are protected under JNHT Act.

The Jamaica National Heritage Trust has the powers to place a temporary stop order on a quarry for investigations if the site has multiple burials, cave art, carvings or pictograph. Such sites may be later declared as heritage sites if the final evaluations prove them sufficiently significant.

Though the Hellshire site was not declared a heritage site, all Taino sites are recorded and become a part of the national inventory.

“So even if a site is to be destroyed, it would become a part of the inventory process. At the end of the day, you will have an inventory so you can go back and do a spatial analysis of all [locations],” said Walters.