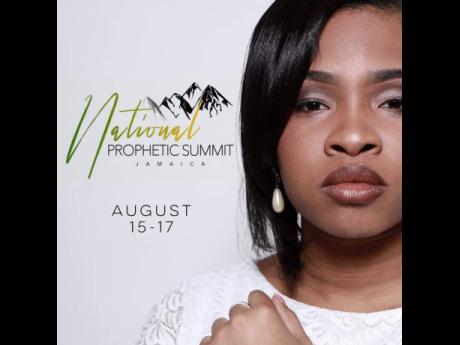 With the grand finale of The GIFTED Network’s National Prophetic Summit (NPS) set for today (Saturday, August 17), the anointed group of visionaries remain confident that the conference is definitely a move of God.

The ongoing summit has seen various gatherings since its start on Thursday evening, to include powerful worship services, seek sessions, impactful messages and prayer and intercession.

And, today is to be no different.

“The Saturday schedule is full of impactful sessions. We will begin with our morning seek session where we will gather to seek the face of God in prayer and through song. This session will follow a ‘harp and bowl’ format where harp represents music and bowl represents prayer.

“Both are taken from the book of Revelation where the elders would sing a new song unto the Lord while playing the harp, and the angels would gather the prayers of the saints and offer them before God,” explained executive administrator of GIFTED, Ocie S. Banks.

He continued, “We will then move into our day session focusing on the topic of deliverance, what this means, and what it looks like.

“Prophetess Sarah Smith, of Light of the Gentiles International, will be leading and teaching this session. Our afternoon session will be a ‘Prophetic Roundtable’ where our attendees will be able to ask a panel questions about various aspects of the prophetic and the gifts of the Spirit. The panel will include ordained and verified prophetic voices hand-picked by Prophet Shambraè Robb (main conceptualiser of the event). The closing evening worship session is our signs and wonders service which will feature guest artist Rhoda Isabella and Prophet Shambraè giving the Word of the Lord to Jamaica.”

Banks noted that Robb has been in continuous prayer and fasting concerning God’s will, mind, and intentions for Jamaica and is expected to release what God has spoken to her concerning the country’s future.

According to him, “We are in high expectation of a powerful move of God in demonstration of His power and Spirit through miracles, signs, and wonders.”

The executive administrator of NPS told Family & Religion that the team of visionaries has been in constant prayer and fasting since the conception of the summit.

He revealed that half the team lives overseas, thus many of the meetings were done online.

“During these meetings, we would not only plan and delegate tasks, but we would enter into powerful times of prayer and prophetic flow, where we would begin to prophesy the Word of the Lord to each other concerning our lives and our roles for the National Prophetic Summit.

“Beginning in April 2019, we moved to a season of collectively fasting once per week for The GIFTED Network and NPS. We had very specific prayer targets and scriptures that we prayed through.

Speaking with Family & Religion, visionary and CEO of the GIFTED Network, Shambraè Robb, noted that choosing the speakers for NPS was a prayerful process.

She said, “We were very intentional about selecting speakers that were not just popular or talented, but were able to invoke the presence and glory of God. It is very important to us that these voices that we know effectively communicate biblical truth, be integral, and are submitted to leadership.

“Through constant prayer and fasting and the leading of the Holy Spirit, we selected Apostle Oscar Guobadia, Prophet Mahdi Sorrell, and Prophetess Sarah Smith.”

Sharing his thoughts on the summit London’s Apostle Guobadia said, “As we approach the end of time, God is raising young emerging apostolic and prophetic voices to equip His Bride for His appearing. I am convinced NPS is one of the many tools the Lord would use to carry out this mission. I am grateful to God for the privilege of speaking at this summit. I believe we are in the era of His power.

“It is my belief that this convocation would be a game changer across Jamaica and even more. To the host and team of this event, ‘Well done’, you have exceeded our expectation. Indeed to the future.”