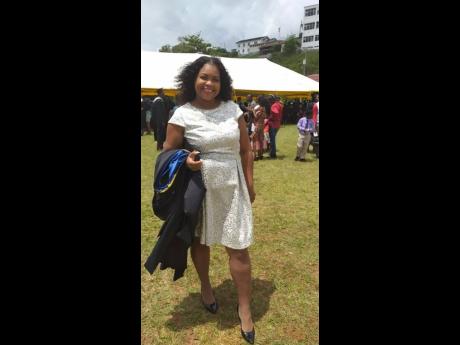 For those of us who grew up with the support of both parents, it was a reality many of us took for granted.

Knowing that dinner would be ready when we got home and everything was planned out each year for a smooth start to the school year was simply our reality.

But these were luxuries for 27-year-old Shabina Mitchell who wished for stability and dreamed for a life that was, at best, her ideal.

“At a point in my life l was living with my grandmother, who took very good care of me. Then l lived with my aunt, who taught me many important values and principles. But both of them migrated for a better life, and that’s when the tables turned.”

From early, Mitchell knew she had to work twice as hard to reach her desired goals. But hard work was never something she feared.

“Both my parents were living in Kingston, but they were not in a position to keep me. My aunt would always send me money on a monthly basis, so l had to create a budget so that the money would last. l had to set my alarm so l could wake up for school and reach on time. l created a study timetable and a timetable for how I would carry out my daily routines. I had to manage my time wisely, while still trying to be as involved as I could in sports and Schools’ Challenge Quiz, among other activities,” she said.

Mitchell applied to Northern Caribbean University (NCU) shortly after leaving high school. She began working on campus and was able to start school, having paid for her first semester with her aunt’s help.

But she was shattered during the Christmas break when she was told she would need to get a scholarship to complete school because there was no more money her aunt could find.

“l did not get any scholarship, so l was concerned about how l was going to attend school the next semester. l met a guardian angel and she said to me, ‘Don’t worry about your rent or food, I will assist you’. This made me extremely happy. l used the money in my account to register for the spring semester and l was able to do my final exams.”

But as the semesters progressed, the lack of funding and uncertainty of what would happen became a recurring trend.

“l asked a friend about the Heart Trust work programme. I went in and applied for the SL-Tops programme and was placed at the South-West TVET (formerly Newport Training Centre) where l was their data entry clerk. While at Newport, I completed certificates in business administration and computer science.”

Based on Mitchell’s salary, she was unable to do full credits and had to take up the modular classes which started at 5:30 p.m.

“It was not easy but l had a dream,” Mitchell said

Find out next week how she moved to not only completing three diplomas, but also her bachelor’s and master’s degrees while working full-time and being a mother.