‘Chicken Back Gravy’ for the soul 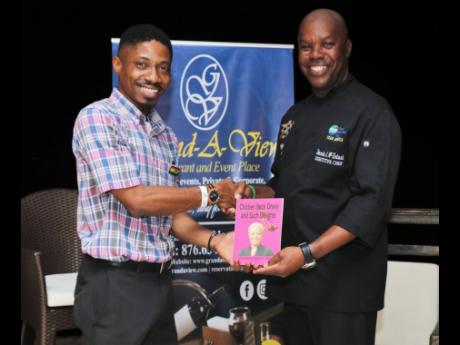 Janet Silvera
Bertland Hope (left), son of Professor Donna Hope, presents a copy of his mother’s book, ‘Chicken Back Gravy and Such Delights’, to executive chef and host Dennis McIntosh during the book’s launch at the Grand-A-View Restaurant in Montego Bay recently.

It took listening to stories about the frustration of two Jamaicans she met under ­different ­circumstances to propel Professor Donna Hope to buckle down and complete her motivational book, titled Chicken Back Gravy and Such Delights.

“In 2017, I was pressed into finishing this product and actually getting it ready for 2018, after I met a policeman at the Caymanas leg of the toll road, who caught me in a speed trap. The policeman told me a story of him being in the JCF [Jamaica Constabulary Force] since he was a teenager, for 20-something years, and he’s still a constable, and he’s very frustrated, and he would like to buy a house, a car, and there was a lot of frustration,” she explained to the intimate group that turned out for her book launch at the Grand-A-View Restaurant and Event Place recently.

The other story emerged from a conversation in her office with a young man who aspired to attend university, but lamented that despite having read the teachings and philosophies of Malcolm X and Marcus Garvey, he was hard-pressed to find things which resonated with him as a Jamaican.

The sentiments of the officer and the young scholar made her come to the realisation that she could no longer procrastinate, as there were many Jamaicans who needed motivation to realise their full potential.

“The lessons and discussions in that book speak a lot about the realities of an individual like myself and many others who have to make it from the ground up and be like chicken back, which is considered poor people steak, poor food,” she explained.

“It is really speaking about the reality of poverty on the ground in rural St Catherine, where I was raised; how you had to imagine yourself out of it, using the tools at hand, and then understanding who you are in society. I cried a lot while writing it,” she reflected.

Hope described Jamaica as a paradise, which is very well-resourced and full of opportunity. She said although Jamaicans are resilient people, many people are “locked away in cages of poverty, from which they are still trying to figure out how they can escape, or have resigned themselves to a life of destitution.

“So I speak about this distinctly in the book, because for me, we live in a society that has become more developed, we have a lot of these titles that have come in. We have life coaches, motivational speakers that say we will reveal to you how to live your best life, and one of the challenges that we face in many of these discussions [is] that they are alien to our reality,” she stated.

She said, as a result, these skills provided by so-called life coaches and motivational speakers are often not used effectively in a Jamaican context.

“What comes to us from the earth, from the bowels of the society; the raw material of who we are as a people, and giving us suggestions that are grounded in the lives of Jamaicans, because this is where you make it. This is where you are going to fabricate your new identity, your new life and your success, which we should be helping each other to find and to craft,” she said.

Her colleague and keynote speaker at the event, Dr Patrick Prendergast, who reviewed the book, described it as a creative and tasteful declaration of knowing one’s self and embracing the liberating and transformative power of education.

“It is a journey that skilfully serves as a frame for lessons in defining self, owning your destiny, in pursuing opportunities, appreciating your agency, working harder and smarter, being brave in the face of fear, in singularity of purpose, in crafting success … . But, it is also a story that is deeply embedded in our culture and about a people of resistance and rising up, of determination and resilience,” he said.

He continued: “She finds time to share with us … her fascinating and intriguing story of a journey through, and out of, poverty. But probably even more significantly, a journey that provides lessons in which, and from which, we as a people can find bona fide support and guidance and motivation and connection in a very personal way,” he said.