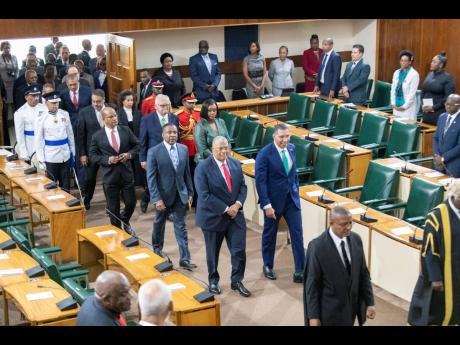 Gladstone Taylor
Prime Minister Andrew Holness and Opposition Leader Dr Peter Phillips together lead members of the Lower House for the opening of Parliament earlier this year. Steve Lyston proposes that a theocracy is perhaps the best system of government for the country.

In the marketplace today, there is great fear of a pending recession and it is causing global anxiety. Many are calling for the replacement of the dollar as the reserve currency. Some predict that there is going to be worldwide economic collapse or a recession.

Any economic system built without the principles of God will always be unstable. God has a principle and a blueprint regarding how they are to operate. It doesn’t make sense to debate which system is better – whether socialism or capitalism. Both are flawed, and both have failed the people.

Socialism is mainly focused on secularism – a system without God – and God is replaced with the word ‘state’. Psalm 127: 1 reminds us that: “Unless the Lord builds the house, they labour in vain who build it; unless the Lord guards the city, the watchman stays awake in vain.” Once God is removed from the society, it becomes a godless society.

Capitalism has also failed because of greed and corruption, and we have seen more countries which are deemed capitalists fail to protect the poor. More laws are being passed to marginalise the poor. Although capitalism supports private ownership – being free to work, trade and own land – we have seen over the years some of the greatest transfers of wealth from the poor to the rich, including bailouts for the wealthy, while the poor are forced to live on the streets.

Promoting theocracy as the best system of government

All things considered, therefore, the best system of government and economy would then be the theocratic system of government, with one who champions the poor – God! He has a welfare system for the poor. It is called the law of gleaning, which would take care of the poor who have fallen on hard times. It supports self-reliance, debt freedom, debt forgiveness and restoration of property after a specified number of years. It also supports big businesses writing off the debts of smaller businesses, and the debts of poorer nations being written off by the wealthier ones. All this teaches us that riches and wealth are gifts given by God to be extended to others in need.

When we see capitalist countries begining to remove systems that would benefit the poor, and socialist countries removing anything that mentions God at any level, then we are certainly heading for a recession.

Theocracy also supports private ownership, where trade can take place and family is the first priority. It operates with grace, mercy, and compassion.

The righteous should never fear recession. It allows new millionaires to emerge and gives nations new direction, new advisers, and transfers wealth into the right hands.

A recession has the potential to:

n Show who is really in charge of the economy and it provides major opportunities and support for the poor.

n Allow other nations that are willing to apply biblical principles to begin to rise in and to power.

n Those who have food and water. Farming will become the number one priority. People will begin to create new opportunities for survival. For example, gold, land acquisition, real property, the rental business, and franchising will all be the focus instead of the stock market. Instead of the banks, more private entities will come to the fore to give people an alternative for loans at a lower interest rate.

n Allow for less manipulation, and as a result, a new market environment will emerge that will change the way business will be done.

n The barter system may once again emerge.

n Faith and trust in God will be restored, and nations and businesses will begin to pray again for solutions. A new breed of managers and leaders will emerge – those who will not depend on their academic qualifications to bring success, but will, instead, trust God to do so.

n The church will also get back to their core mandate of dealing with the total man. There will be a fair distribution and the haves will help the have-nots, similar to the church referenced in Acts, where those who have more than one will willingly give to those who have none.

We should not fear recession because it acts as a societal and national reset, bringing things back to basics for a fresher, fairer start

Steve Lyston is a biblical economics consultant and author of several books, including ‘End Time Finance’ and ‘The New Millionaire’..