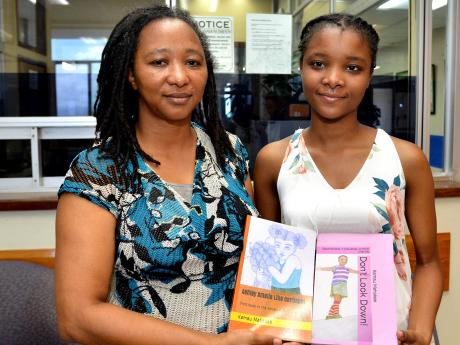 No surprise to her or her parents, 17-year-old Ruwenzori Ra has racked up 16 Caribbean Secondary Education Certificate (CSEC) passes, more than enough for her to matriculate to sixth form and, later, an excellent tertiary institution.

The budding scholar secured 15 CSEC subjects in one sitting and one in her fourth year at Ardenne High School.

Ra attributed her scholastic success to her parents' and older siblings' accomplishments.

"I give credit to the environment I was brought up in, where you are taught to believe in yourself and what you are capable of doing, and also my siblings around me. Their accomplishments are inspirational; they are like role models," she said.

READ: Happy to homeschool: Mother of four guiding her children to great achievements In Photo: The Ra children (from left) Ruwenzori, Kuti, Ausar and Tchakamau

Ra said that witnessing that path of achievement, she had no choice but to be great.

She sat nine subjects at Ardenne and was homeschooled by her mother, Kamau Mahakoe, for the other six.

Ra was exclusively homeschooled by her parents from birth until it came time to sit the Grade Six Achievement Test, the results of which placed her at her school of choice.

When asked why she chose to take on a heavy workload, she responded, "Why not? At first, thinking about doing 16 subjects was because my siblings before me also did that, so it was like an expectation, but also because I saw what came from them doing the subjects, like scholarships, etc.

"But gradually, once I came to realise it's manageable, my response has just been 'why not?' because if you see an opportunity in front of you, there is no reason to limit yourself. I think anybody can do 15 subjects in one sitting."

Despite devoting most of her time to her studies, Ra has also been engaged in several extracurricular activities.

She placed second in the Rita Marley Foundation Songwriting Competition in 2019 and 2018, she has illustrated the covers of two novels, she was a prefect and peer counsellor at Ardenne High, and she is a brown belt in Zen-Do Kai Kan karate.

The future environmental scientist is heading to sixth form come September, after which she is hoping to go on to university overseas.

She is encouraging other Jamaican students looking to sit the CSEC examinations to focus their attention on studying and limit distractions.

"It starts with your mindset. If you have a positive mindset from the get-go and you tell yourself that nothing is really hard, then it's fine, and, of course, you should study. Also, cut back on things that would be more distracting, like social media. Limit the amount of time you spend watching television or spend on the computer and just focus on studying," she said.

Mahakoe, who said she was exceptionally proud of her daughter's achievements, said that her success was due to her early exposure to greatness.

"All our children are homeschooled, so coming up, she was just exposed to seeing success and didn't consider failure to be an option. We also expose them to others who have accomplished greatness, whether it's children like themselves or other blacks who are successful or invented things," Mahakoe said.