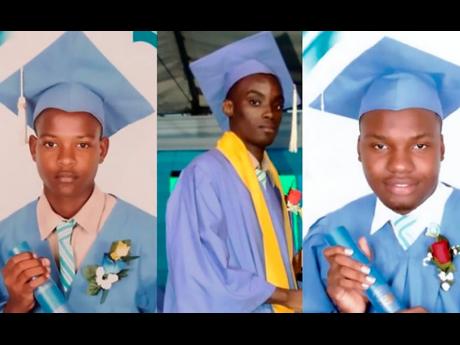 Denbigh High School has been in celebratory mode since the release of the Caribbean Secondary Education Certificate (CSEC) grades. This as three male students attained nine subjects with grade one passes, creating history at the Clarendon-based institution.

Janice Julal, principal of the institution, said, “The Denbigh High School family is extremely proud of the three young men. We have been focusing on recognising male excellence in our Aqua Male Initiative of which they are a part, and it is the first in the school’s history that we have had three male students achieving nine grade ones in one year.”

Kevoy Townsend, Gerjon Smith and Omarion Pusey have been receiving congratulatory messages since the release of the grades. Townsend, the year’s graduating class valedictorian, told The Gleaner, “I am very satisfied and comfortable with my results because I know that it took a lot of sacrifices to obtain them.” The student who hails from Cherry Tree Lane in Four Paths, Clarendon, added, “My parents are not wealthy, but they ensured I was always present at school.”

Similar sentiments were expressed by his peer Gerjon Smith, who said he is honoured, proud and satisfied with his results. “No set of words can can really explain that feeling when you know all your hard work indeed has paid off. I am the first in my family to achieve such an exceptional achievement in CXC exams.”

A resident of Hayes in Clarendon, Smith, who said he is from a single-parent family, expressed gratitude to what he described as his support team of teachers, family and friends. And like Townsend, Smith says his career goal is to become a surgeon.

Pusey, however, told The Gleaner that there is still uncertainty surrounding his career choice. “I always wanted to be a pilot but by doing the sciences, my attention switched to a career path in medicine [so I’m] not sure about the profession as yet.” The resident of Kemps Hill in the parish added that he was particularly proud of his passes which helped in maintaining the reputation of his school. “I am very proud of my passes because it makes my mom happy and helps Denbigh High, one of the best (schools) in Jamaica, to maintain its reputation as a top school and one which primary students hope to join when they graduate.”

Julal said, “They have been showing signs of excellence over the years, consistently earning spots in the top three among their peers and being recognised at prize-giving.”

She added that the institution is exceptionally proud of the achievement as they prepare to celebrate the school’s 50th anniversary in September. “What a way to kick off our celebration!”