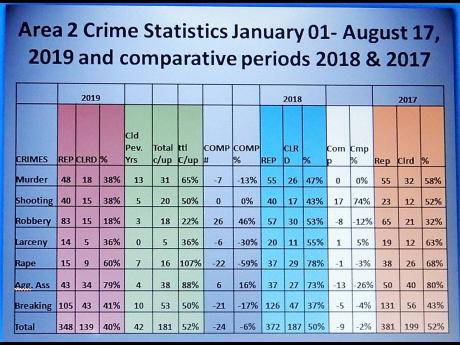 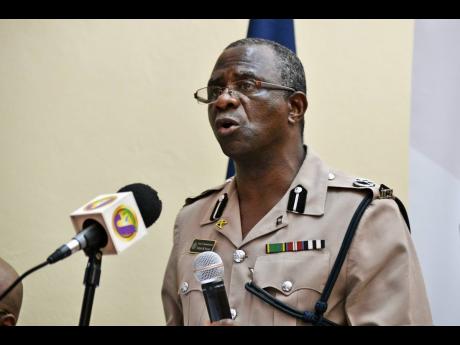 The Police Area Two Headquarters, consisting of St Mary, St Ann and Portland, has reported a six per cent reduction in serious crimes up to August 17 this year, compared to the corresponding period in 2018. The current figures also compare favourably to those of 2017.

Speaking at a press conference at Area Two Headquarters in Tower Isle, St Mary, on Wednesday, ACP in charge of the division, Egbert W. Nelson, reported that there is decrease in all areas except for robbery, 83, up from 57, and aggravated assault, 43, up from 37.

Murder figure for the region stands at 48, compared to 55 last year, a 13 per cent drop.

But while murder has decreased across the region, the figure for St Ann has shown an increase for the period, with 28 murders recorded, up from 23 last year.

For Portland, the figure has declined from nine to seven, while for St Mary, the figure is 13, down from 23 the previous year.

The decline in St Mary could be attributed, in part, to the introduction earlier this year of the #ANicerBay initiative, aimed at decreasing the murder rate in Annotto Bay.

Nelson said two murders have been committed in Annotto Bay since the start of the year, as against eight last year, a 75 per cent drop.

He listed the #ANicerBay initiative among several positives for the region, which also included two recruitment drives and the inaugural women’s conference held in May.

The police also reported that 29 firearms have been recovered over the period, 23 in St Ann and three in each of the other parishes.

Regarding traffic crashes, there has been 38 accidents which have claimed 44 lives, while 44 persons have been arrested for narcotics and a quantity of cocaine and ganja seized.

Nelson said the police will remain steadfast in carrying out their duty and will expand their investigative capabilities and make greater use of technology in the fight against crime. There will also be an increase in public education efforts, by way of neighbourhood watches, the police youth clubs, and safety in school initiative.

The ACP urged parents to be extra careful as they do back-to-school shopping.