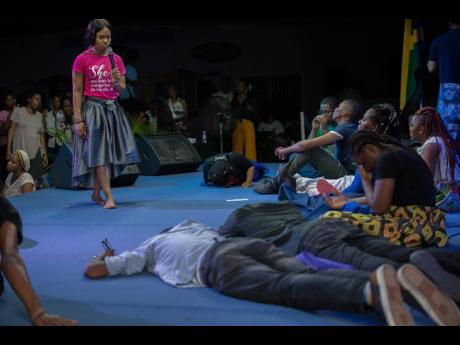 “It was the birthing of a new era in Jamaica,” said the Reverend Shambraè Robb, chief executive officer of The GIFTED Network, and host of the National Prophetic Summit (NPS) which took place over a three-day period last week, starting on Thursday.

The 21-year-old woman of God declared that the première staging of the prophetic summit, which was held at the Emmanuel Apostolic Church in Portmore, was indeed a success, and that God showed up mightily on the worshippers’ behalf.

Not only that, but Robb told Family & Religion that the intercession of the gathering birthed strong prophecies for Jamaica.

She shared, “It was the announcement of the aggressive arrival of the Lord’s revival of an entire nation. We saw the glory of God descend with literal, physical, visible smoke and fog that forced the masses to their knees in holy adoration of the Lord. The heavens literally opened over us. The worship that went up from Portmore on our opening night was followed by a torrential thunderstorm that became a sign unto us that heaven was responding to our cry.”

Noting that the aim of the summit was to break people out of religion and introduce them to the authentic glory of God, Robb said she believes this was achieved.

“We resolved as a ministry to teach and train people on the true, biblically sound nature of the Holy Spirit and His prophetic ministry. We aimed to bring people into a new dimension with God,” she said, adding that this was accomplished with physical healings, deliverance, and heart piercing worship that ultimately changed lives.

The young prophet revealed that the summit has yielded multiple testimonies of healing, pain and chronic illnesses dissolved, multiple souls won for the kingdom, deliverance and breakthrough.

She said that many have testified that NPS literally changed their lives and introduced them to the authentic glory of God.

According to her, “People have expressed their excitement and anticipation for our next event, and we are grateful to have the opportunity to continue to change lives for the glory of God.

Admitting that hers is among the many testimony produced by the conference, Delmarine Morris-Williams shared the somewhat supernatural way in which she was made to attend.

“I saw all the flyers on social media and I really wanted to attend. There was just a stir in my spirit and I asked God to make a way.

“He told me I would go, but I thought it was my own voice. A few days before the event, I texted someone to ask about the event. I was walking in pride because the Holy Spirit told me to ask the person for a ticket, I didn’t. Later in the night of that very same day, I was scrolling on Facebook when I saw that same individual giving away a free ticket for event, so I quickly texted her to see if I could get it,” Morris-Williams said, adding that the person responded by revealing she was thinking of her when she made the post.

Reporting that all three days were amazing, Morris-Williams said she left the summit as a totally transformed individual, and that her life is forever changed.

According to her, “The worship was nothing like I had experienced! What was most impressive was the tangible visible evidence of glory of God.

“I am not and will never be satisfied again with ‘flesh worship’ or ‘surface encounters’. #NPSJAMAICA has left an insatiable desire for more of God.”