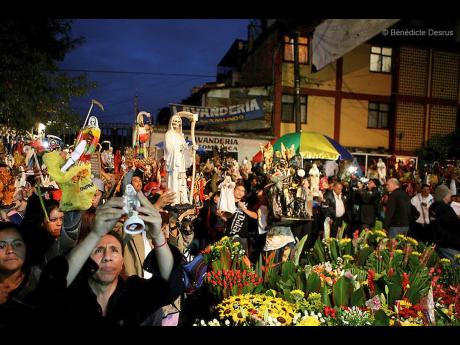 Saint Death believers pray during the celebration of Saint Death in the popular Tepito neighbourhood of Mexico City. 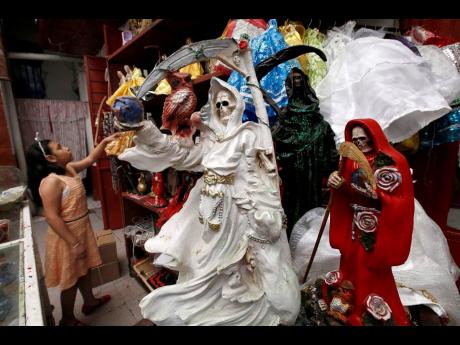 A child in Tepito, Mexico City, prays to Santa Muerte. 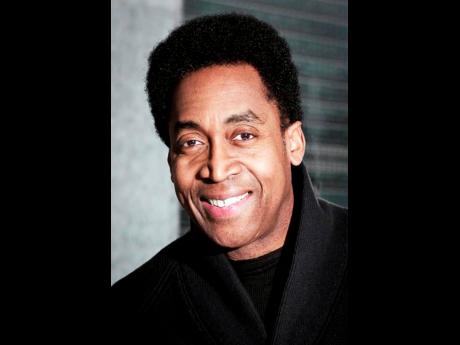 Nuestra Señora de la Santa Muerte, or Our Lady of Holy Death, is a religious movement that mainstream Christianity has condemned. So far, this warning has been ignored. With origins in Mexico, Santa Muerte has spread to the United States, and is believed to have grown to over 10 million devotees in the last 10 years.

The movement, disparagingly referred to as a religious cult, is named after Santa Muerte – the patron and protector of society’s marginalised. They are the poor and the disaffected, the criminal, the homosexual and those in the transgender community. They are those that live on the edge, tempting the law, and fate.

Santa Muerte is fittingly depicted as the grim reaper – skeletal, with scythe in hand. Many believe her to be an embodiment of Mictecacihuatl, the ‘Lady of the Dead’, a goddess that ruled the underworld in Aztec theology.

Today, Santa Muerte is very much interwoven into the daily lives of believers. They recite novenas in her name, sing her praises and make offering to her in exchange for favours. Votaries of Saint Muerte are particular in their worship. They are versed in rituals, dedicated, ably defending their religious beliefs. Saint Muerte does not discriminate, they say. She answers the prayers of everyone that calls on her. This explains her popularity among Mexico’s drug cartel.

He referred to the folk saint as a demon, stating that he “had a number of people who have come to me as users of this practice and found themselves tied to a demon or demonic tribe”.

Father Gary Thomas, a Vatican trained exorcist, echoed like sentiments, stating, “I have trained a number of people who have come to me as users of this practice and found themselves tied to a demon or demonic tribe”.

Italian Cardinal Gianfranco Ravasi declared that the worship of the Bony Lady “is the celebration of devastation and of hell”.

The Roman Catholic Church is astonished by the exponential growth of this religion in Tepito, Mexico City. With the influx of Mexican immigrants to the United States, Santa Muerte has become part of that country’s religious tapestry. In fact, many have left the church and are openly embracing this phenomenon.

The explosive growth of Santa Muerte does not make it an authentically sound movement. In fact, the true meaning of this deity has been lost and a culture of superstition and ignorance has stepped in. The gullible and the desperate for protection engage in questionable acts such as inking deals with this deity.

VALLEY OF THE BONES

What concerns me most is the gross misrepresentation and misunderstanding of this holy figure. In every culture, gods, goddesses and deities are representations of nature’s forces. For example, Thor, the Greek god, represented Thunder. In African tradition, Ogun represents iron and war. Over time, these natural forces become gods that are dutifully worshiped. This dynamic applies to Santa Muerte. As her name suggests, she is a representation of death, the grave and the wisdom therein. In every great civilisation the grave, as it is today, holds its own keys to wisdom. In Egypt, Anubis was this god of the grave and in Greece, it was Hades, and Melkarth in Phoenicia. In Hinduism, Kankala-murti (the one with the skeleton) is the iconographical form of Lord Shiva, and Mother Kali is depicted with a garland of skulls.

Not surprisingly, the Christian Bible, a chronologically young scripture, has references to the grave that invite far deeper enquiry than our linear thinking clerics are willing to entertain. I refer to Ezekiel’s vision.

The hand of the Lord was on me, and he brought me out by the Spirit of the Lord and set me in the middle of a valley; it was full of bones. He led me back and forth among them, and I saw a great many bones on the floor of the valley, bones that were very dry. He asked me, “Son of man, can these bones live?” (Ezekiel 37, New International Version)

And the Bible also mentions Jesus’ reputed descent into Hades (Sheol in the Old Testament).

Never have unbridled seekers of truth recoiled from learning the mysteries of death and the grave. I do not see how we can celebrate Harriet Tubman, one of our most beloved of ancestors, without mentioning the knowledge from the graveyard that she so readily sought and applied.

This brings me back to Our Lady of Holy Death – a representation of the wisdom that death and the grave hold, nothing more, nothing less. To implore and bargain with her (for favours) as the ancients might have done with Anubis and other deities, is a no-no, and a stark example of man’s lack of understanding and unwillingness to pursue knowledge for its own sake. I say unequivocally that protection and a divine meed awaits those that pursue knowledge for its own sake.

The wisdom of the grave is elusive, but attainable with selfless desire. The lives of those we admire most reflect that much.

- Dr Glenville Ashby’s latest book, ‘Conflict of Identity: From the Slave Trade to Present Day - One Man’s Healing in Benin’ is scheduled for release in October 2019. Email feedback to columns@gleanerjm.com and glenvilleashby@gmail.com, or tweet @glenvilleashby.