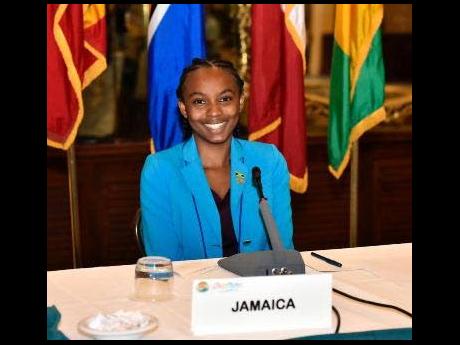 Nestled in the cool hills of Trelawny, Westwood High School is known for producing young ladies with sterling academic performances. Bryanna Hylton is no exception as she successfully copped six ones and a two in the recently concluded Caribbean Advanced Proficiency Examinations (CAPE). This included a one for both units of biology, chemistry, physics, Caribbean studies, Spanish and a two for pure mathematics.

This aspiring medical doctor initially wanted to become an engineer but made the decision to switch after her sister became ill.

“My sister took sick, and that was really rough for me and my family … as I felt completely helpless,” Bryanna said.

“From that experience, I realised that I never want to feel helpless again, and I want to help other people who feel helpless, too.”

Bryanna’s passion for helping others led her to actively seek opportunities to assist her school’s community.

“I like to keep occupied … so this year, I was the Sixth Form Association president, junior minister of tourism for Jamaica, captain of the debate team, member of the Quiz Club, Spirit Week coordinator, a prefect, and just an all-round student.”

Surprisingly, Bryanna admits to being “a grade-A procrastinator”.

“So time management has always been a weakness of mine,” she said.

However, her solution to procrastination is to create detailed schedules that determine the activities she needs to do at that specific moment and how much time is allocated to each task.

This balancing act proved to be the most difficult challenge Bryanna faced this year as she explained that being a youth minister, among other roles, took her out of school often, at important times of the year. Nevertheless, she asserted that in the event that balancing extracurricular activities proves to be too difficult, a student’s first priority is his or her academics.

Her advice for students who aim to be successful is to “put God first and commit everything you do to Him”.

She said: “Before every exam, test, or lab, just offer a short prayer and have faith that He will see you through.”

Additionally, she said that students should “try not to pay attention to what other people are doing and get side-tracked by spending time trying to ‘beat’ them. What you are doing, is an individual thing, and so you should be your only competition”.