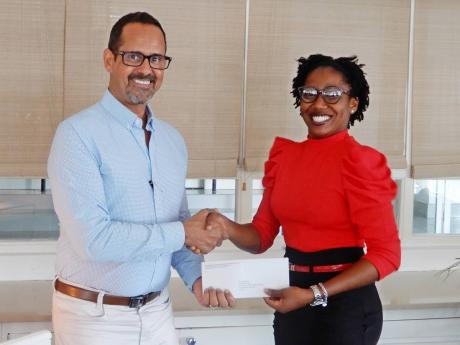 The Dr Osmond Tomlinson Trust Fund Scholarship for 2019 has gone to Sheri-Ann Ashman, a student of St Hilda’s Diocesan High School, the second consecutive year that a student from the Brown’s Town-based institution was copping the award.

It is the 19th year that the scholarship, named in honour of the late medical icon, Dr Osmond Tomlinson, is being awarded and is geared at assisting students in St Ann during their final three years in high school.

Five students were shortlisted for the scholarship and sat a series of tests prior to the final selection, including an interview last week.

The four other finalists were given grants to assist with back-to-school expenses. A student at The University of the West Indies (UWI) Open Campus in Ocho Rios, which Dr Tomlinson Snr had helped to establish several years ago, was presented with a bursary.

“I would encourage you to read and, every one of you, think big, think really big. Just because you come from humble surroundings doesn’t mean you have to follow the trend and do what your friends do,” Tomlinson urged.

He also encouraged the students to balance their school work with other activities.

Ashman, who was accompanied by her mother, Angella Flynn, and teacher Grace Ann Yorke, was quite elated at winning the scholarship.

“Thanks for this wonderful opportunity to further my education and thanks for the encouraging words. I’m just very excited,” she said in her response, directed at Tomlinson. She also encouraged the other student applicants, declaring: “Congrats, you’re not a loser, we’re all winners.”

Delighted with her success

Meanwhile, Yorke, who teaches Ashman natural science and family and consumer management at St Hilda’s and who had chosen her to apply for the scholarship, expressed delight at her success.

Final-year social work major at UWI, Shaneil Jackson, said she was honoured to be a recipient of the scholarship trust, as she begins her final year at the Ocho Rios Open Campus, after which she plans to do her masters.

And Steer Town Academy student Jade Duncan said even though she did not win the scholarship, she was happy for the grant she received.

“I’m very proud of Jade and what she has done and I would like to encourage her to continue doing well. She is one of our great students and I’m extremely proud of what she has achieved,” Wright said.