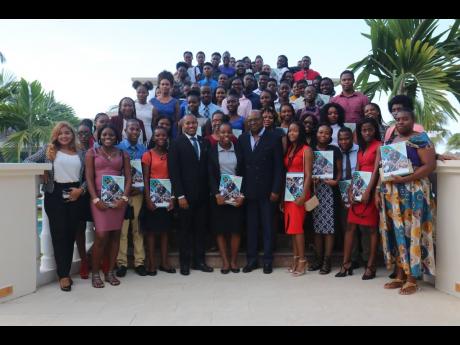 According to the MP, the scholarships span programmes of study at all tertiary institutions in Jamaica, as well as for several students overseas in countries as far away as China.

“This year, we are spending a total of $10 million to provide those grants and support as well as the books for the PEP [Primary Exit Profile exam] students, uniform support in the usual way and ancillary support,” Bartlett said.

According to him, this year is the most impactful programme that he has had in terms of the qualitative measures and his team’s ability to track those who started from GSAT through to university.

As he addressed recipients who had become somewhat like members of his family, having started in primary school and now ready to graduate tertiary institutions, the emotions and the energy of his passion was apparent.

“Nothing in my 43 years of public service has given me greater satisfaction than to see these young people from challenging economic circumstances fulfil their dreams and position themselves for prosperity,” he admitted with pride.

And this was bolstered by The University of the West Indies, Mona, banking and finance student Shavone Smith, who has been a recipient of the grant since her primary-school days.

“I was enabled to purchase my first laptop to do my assignments. Being a recipient of this grant has not only alleviated financial struggles, but has also assisted in the preservation of my mental health,” she explained.

Marvel Foster, who just completed her bachelors degree in hospitality and tourism management, and is currently studying in The Bahamas, added that a little goes a long way, especially when one believes there is no help at all.

In his keynote address, State Minister in the Ministry of Industry, Commerce, Agriculture and Fisheries, Floyd Green, encouraged the youngsters to seek out mentors to help them along their academic journey and other spheres of their lives.

His mentor being Bartlett, Green said he became a politician because he was determined to not just talk, but walk the talk. “What I like about Ed’s model, any time he tells you something, him roll out the statistics to go with it,” Green said.

The junior minister also pointed out the importance of involvement in extracurricular activities such a clubs and societies, as many employers look at community participation in determining who they choose to hire, as opposed to those who solely has degree.

“I know it is difficult. I know it is challenging with the work load, but it makes a difference. It truly helps with interpersonal skills; it truly helps to validate your leadership potential and ability. It is one of the things that employers look for when they look at your CV, [curriculum vitae]” he said.