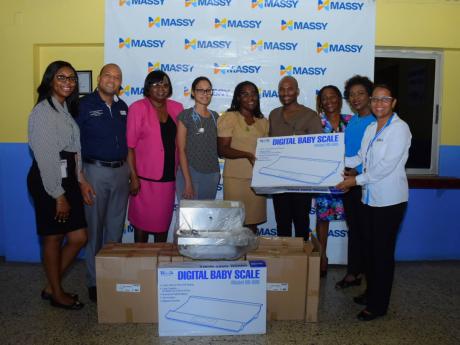 Just a little over three months after adopting the Seaview Gardens Health Centre, Massy Group Jamaica handed over new equipment valued at approximately J$600,000 as part of its commitment to help improve the facility that serves the residents of Seaview Gardens, White Lane, Henley Road, and Spanish Town Road in Kingston.

Massy Group Jamaica handed over two digital baby scales and seven much-needed hands-free wash basins, which, according to the staff at the clinic, will go a long way in preventing the spread of bacteria that can thrive in health facilities, further compromising the health of people who are already sick.

“We’re so thankful to Massy Group for these pieces of equipment; they’re a tremendous help for us here at the centre. With these, we’re no doubt right up there with some of the technology that some of the major healthcare facilities are using,” said Dr Richard Manning, medical officer in charge of the Seaview Gardens Health Centre.

“The [hands-free] wash sinks are critical in preventing the spread of bacteria as it means we no longer need to touch the tap to turn them off after washing our hands, and the electronic baby scales will help us to be more accurate in our measurement. Importantly, we can now be a lot more efficient, and we’re in a better position to handle the demands of seeing more patients daily,” Manning added.

As part of adopting the clinic in May this year, Massy pledged $3 million over a three-year period to upgrade the facility by providing much-needed clinical equipment, as well as making infrastructural upgrades, including painting, fencing, and providing improved lighting.

Rohan Ambersley, CEO of Massy Gas, said: “When the centre sent us their needs list, they identified these pieces of equipment as the ones most urgently needed, so we moved swiftly in procuring them, and today, we’re happy to be playing our part in upgrading the facility and, by extension, uplifting the community.”

Intimating that this was just the beginning, Massy mentioned that it would also be hosting a wellness day at the centre later this year, which will include diabetes education, counselling sessions, blood glucose testing, and blood pressure checks. In another phase, the company will provide a needed facelift for the health centre.

The Ministry of Health’s Adopt-A-Clinic programme is designed to encourage Jamaicans, the Jamaican diaspora, and other friends of Jamaica to ‘adopt’ a clinic in communities across the island with the aim of upgrading and improving the services that they can provide. To date, an estimated eight health centres have been formally adopted, with approximately 20 more partnerships to be announced later this year.