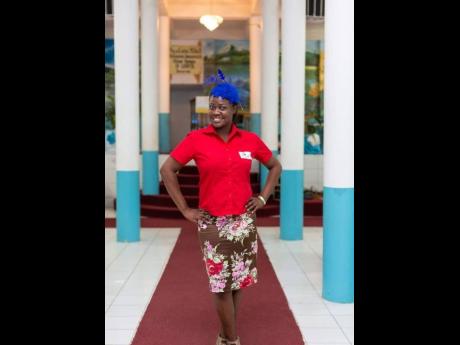 When Kayan Douglas of Yallahs in St Thomas, speaks about the power of God she does so from personal experience.

She recalled a frightening experience that she had while alone at home one night that forced her to rely only on God for help.

“That Monday night, I arrived home late from an awesome night of women’s fellowship, and I lay in bed texting a friend for some time. It was extremely hot, and so I decided to lift the mattress off the bed and place it on the floor in the back room, where it was much cooler.

“After doing that and returning to the front bedroom for the bedding, my eyes glanced at the side window, where I saw a figure shift from it,” she said.

Douglas told Family & Religion that further investigation revealed that a man, who was clothed only in underwear, was crouched down at the side of her window.

Giving an account of what happened next, she said, “Immediately, the anointing came upon me and I used my bare hands to hit the grill at the window and shouted, ‘The blood of Jesus is against you!’

“He took off towards the back of the house – same side where the back bedroom was and I charged in that direction – and I stormed heaven!

“No weapon formed against me shall prosper. Whatever plans the enemy has tonight is cancelled! Fire from heaven, consume the enemy right now in the name of Jesus!’ was my short fervent prayer.”

Douglas, who attends the Pentecostal City Mission in Southaven, revealed that immediately, she heard a sound on the concrete roof of her house, which was she soon realized was the cracking of thunder, which were followed by lightning.

“The rain began to pour. All this was happening, and I felt the presence of God and hosts of angels encamping about me. I thought I heard sirens of the police, but no, they never came, even though they were called. Instead, they were (vehicle) alarms all around in the community because of how powerful the thunder was, or better yet, the manifesting presence of God because of my beckoning unto Him,” Douglas said.

She said that despite the delinquency of the law enforcers, she was able to maintain her peace because she felt protected and accompanied by God.

According to her, “It’s best to know God for yourself, and not rely on the relationship your friends, prayer warrior or pastor has because in the darkest of night, when the devil is lurking, seeking whom he may devour, it’s only you and God! You have to know the Word and have it written upon your heart and live the life you are called to live so that when the forces of darkness come up against you, you can command the enemy to take his flight, and he has to obey.”