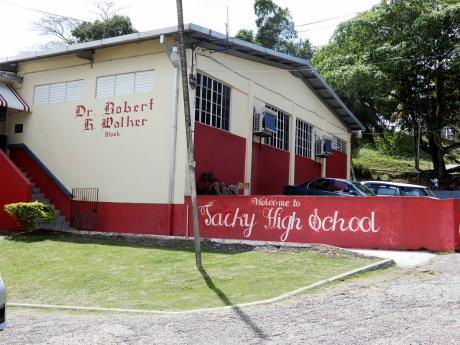 Tacky High School in Gayle, St Mary, reopened yesterday but is still short of the several computers that were destroyed in a fire that ravaged a section of the building five years ago.

“No, we have not received any computers,” principal Errol Bascoe told The Gleaner on Saturday. This is despite a promise from a non-governmental entity to donate computers to the institution a day after a Gleaner story highlighted the school’s plight.

The shortage of computers means that the school is operating at about 70 per cent of its capacity prior to the fire.

Thieves broke into the school on May 5, 2014, and set fire to the administrative block that housed the principal’s office, records office, book room, staffroom, and bathroom, resulting in damage estimated at $45 million.

Several computers were among the items destroyed.

The issue of the teacher shortage that is affecting the school system across the island has not spared Tacky High, which will reopen short of a mathematics teacher and a physics teacher.

“We don’t really have any major challenge otherwise,” Bascoe said.

Tacky High School continues to operate from two campuses, with grade-seven students being housed away from the main campus.

Over 1,100 students are expected on roll at Tacky this academic year.