Tacky High School gets computers from Food For the Poor 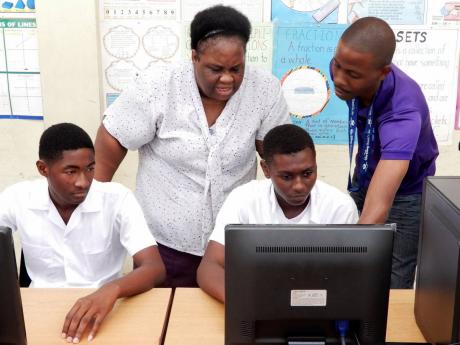 Contributed
Tacky High School student Shaquiel Williams (on computer) gets instructions from IT teacher Lois Small (second left) and Food For the Poor IT specialist Ryan Francis (right), as he tries out one of the new computers..

The severe shortage of computers at the Tacky High School in St Mary has been eased with a significant donation from Food For the Poor (FFP).

A fire at the school in 2014 left the institution short of several pieces of equipment and furniture and almost crippled the information technology (IT) department.

Ryan Francis, IT specialist with FFP, delivered 18 computers to the school, and with the help of several students and staff members had them installed.

Principal Errol Bascoe was pleased with the donation but said that the school was still in need of more.

“We have got some of what we need because Food for the Poor has stepped in, so we’ve got some 18 computers, and this will go a far way,” Bascoe acknowledged.

He added: “We were in dire need, so we still need more computers. Prior to this, we had, like, four persons to a computer in class, so this should bring us down to about two to a computer. The ideal thing, really, is to have each person to his system, but we’re getting there.”

Before FFP’s intervention, the school had just 10 working computers.

Head of the business department and IT teacher at Tacky High Lois Small said that the new equipment would go a far way in helping students prepare properly for their school-based assessments.

“This is a very, very big help, a great help,” Small said.