Mahabeer: My children are my greatest achievement 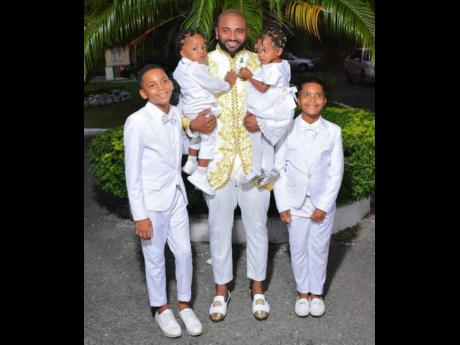 Contributed
Orlando Mahabeer and his children.

Orlando Mahabeer of Gimme-Me-Bit, Clarendon, says his children are his legacy and greatest achievement. The father of four said he was a single parent for almost a decade, adding that the full care of his then three-year-old and three-month-old sons were entrusted to him.

He cited challenges in his capacity of a single parent, stating, “It was extremely complicated, I had to change diapers, cook, wash, etc. It was so much that I could not work because I had no one to leave them with ...,” he told The Gleaner.

Mahabeer added that he did odd jobs whenever he could to provide for his children, and said his father assisted him financially. “I think I have the best dad. I am just trying to emulate [him.] He’s my greatest inspiration,” he added.

He said his relationship with his mother was broken, noting that he used the experience to guide his parenting strategies.

Mahabeer shared that the weight of single parenting was lessened when he met his wife. “Now we can take turns helping with homework as opposed to the past where I would be bound to help both of them. It creates a balance having someone to catch me when I fall short as a dad.”

Having expanded his family with another son and a daughter, he said his children are his true purpose and motivation. “I am humbled and honoured to be their daddy. My happiness is a reflection of how happy they are.” Mahabeer said he is not only a father to his children, but he is also their friend. “It’s hard sometimes to create a balance between being a daddy and being a friend.” Stating that black fathers are undervalued, Mahabeer said he encourages fellow fathers to emulate their own fathers and add to the good traits. “In the case where your dad may have not been the best, try to break that cycle,” he said.

Mahabeeer said his children are true representations of him. “They are the only thing I truly own in this life – something that will always be a part of me.”

See more stories in the Family and Religion section of The Sunday Gleaner.