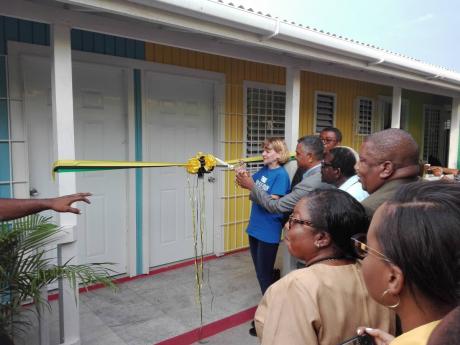 Contributed
Denise DiBiase is assisted by Michael Stern, deputy board chairman of the Southern Regional Health Authority, as she cuts the ribbon to mark the official opening of the Rock River Health Centre in Clarendon.

Scores of residents of the rural Rock River community gathered on Wednesday to witness the official opening of the Rock River Health Centre, a facility residents say was long overdue.

Denise DiBiase was lauded for spearheading the project and providing funding for the construction of the facility.

DiBiase said that this project of personal importance becaue of first-hand experiences, having witnessed her late husband battle a chronic illness. Speaking of the project, DiBiase told The Gleaner, “It’s very close to my heart because I know how important it is just having access to a clinic or medical facility, especially near your area,” she said.

Councillor of the Rock River division Uriah Mitchell expressed gratitude to the leaders of the Rock River Seventh-day Adventist Church, whom he said have accommodated healthcare services at their location for a number of years.

Elder Uton Nelson of the church said that accommodating healthcare services was the right thing to do, adding, “I live for my community, and I love to volunteer.”

While noting that providing the service proved inconvenient at times, he said it was a worthy gesture. “It is worth it. When you do something and see the smile on somebody’s face, that is enough pay for what you do.”

Member of Parliament for Clarendon North Central Pearnel Charles Snr praised DiBiase for what he described as a job well done, adding that a bust of the donor should be erected on the facility’s grounds in her honour. He also made a special request to the Southern Regional Health Authority (SRHA) that dental services be provided at the facility at least once per month.

Deputy Board Chairman of the SRHA Michael Stern said that the opening of the health centre will positively impact the community and, by extension, the parish. He said that the construction of community health centres will help to reduce the workload within hospitals. Assuring residents of quality services, he said, “We are getting you some of the best staff to serve you and some of the best equipment to function effectively.”