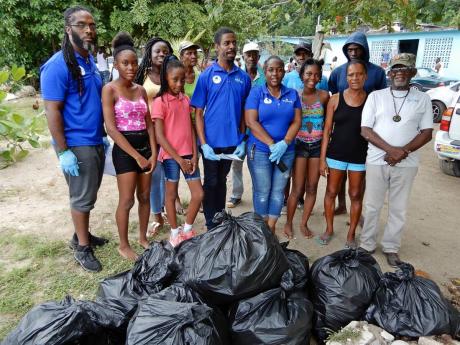 Carl Gilchrist
A pleased Kelvin Archer (right), president of the Rio Nuevo and Stewart Town Fishing Association in St Mary, members of the Kiwanis Club of Charlton-Alexandria; members of the St Hilda’s Diocesan High School Key Club; and fishermen from the association stand alongside some of the garbage collected on Saturday.

Members of the Kiwanis Club of Charlton-Alexandria in St Ann journeyed to St Mary on Saturday to join fisherfolk at the Rio Nuevo fishing beach in that parish in cleaning the beach, in observance of International Coastal Clean-up (ICC) Day.

They were supported by several St Hilda’s Diocesan High School students who are members of the school’s Key Club.

Kelvin Archer, president of the Rio Nuevo and Stewart Town Fishing Association, told The Gleaner that the fisherfolk appreciate the support that they got to get the beach clean.

“We appreciate it very much, and although the beach hasn’t got much to clean, there are still things there, and we really appreciate that they came in and did a good job with us,” Archer pointed out.

The combined team removed plastic and, glass bottles, diapers, old shoes and other debris from the beach, filling several garbage bags with the waste matter.

Phileman Wynter, director for the Kiwanis Club of Charlton, Alexandria and site coordinator for ICC clean-up day, was satisfied with what was achieved on the day.

“It was good. We partnered with the Rio Nuevo and Stewart Town Fishing Association and surprisingly enough they came out, though it’s a day when most of them would have been going to sea, then come in and try to sell their catch,” Wynter noted.

He continued: “Those who were able, really partnered. They did the bulk of the work, got the place cleaned up; and the only challenge they have expressed to us is, even after they’ve cleaned it up, the challenge that they have is getting NSWMA to come in on a regular basis to collect the garbage from here. But, overall, I am pleased with the outcome.”

Several other beaches and coastlines in St Mary were also listed for clean-up on Saturday, among them Pagee Beach in Port Maria, the Port Maria coastline, the Bond fishing beach in Oracabessa, and the Annotto Bay coastline.