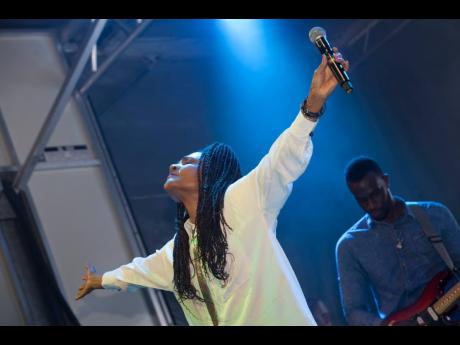 Shanna kaye Monteith
Minister Carlene Davis during her ministry at the Jamaica Fun in the Son Engagement concerts.

“The premier of Jamaica Fun In The Son community engagement 2019 was just amazing. It just goes to show what faith in God can do,” said head of Glory Music and main organiser of the Jamaica Fun in The Son movement Tommy Cowan.

The aim of the new venture was to win at least a thousand souls for the Kingdom of Christ. However, Cowan said though this was affected by the poor weather conditions, he still considers the effort successful.

He said, “For both Port Antonio and Mandeville, in spite of buckets of rain, the team kept the faith that this is God’s assignment, and so the weather behaved in a way that we were able to execute and deliver all that was promised, which was wonderful praise, wonderful worship, and God received the glory.”

Cowan described the reception of the people at both locations as heart-warming.

According to him, “They just loved us – every minister and every musician. There was resounding jubilation of praise and worship in the atmosphere. Even when we were leaving after the event, they were thanking us in the middle of the night, saying things like ‘We were truly blessed, please come again. You have our support’. The churches had up their stalls and their counsellors. It was good and a great number (hundreds) turned out to the JCF Recruitment Drive and Expo in Port Antonio.”

Of the reported thousands of people in advance, Cowan told Family & Religion that over 300 made a commitment to Jesus.

“The heavy rainfall kept lots of people at home. Nevertheless, hundreds were there from early morning. We had a delay to the original start time, but none complained. I recall a man who recently suffered a stroke stayed from 11:00 a.m. to the end.

“We are very encouraged by what took place. Jamaica Fun In The Son Community Engagement is a winner and our sponsors – The Best Dressed Chicken and the RJRGleaner Communications Group – our supporters, contributors, and the staff at Glory Music, gave selflessly,” he said.

Also featured on the shows were the JCDC Gospel Winners, the Youth Reaching Youth Drama team, the Jamaica Constabulary Force Band, and the Word by internationally renowned Pastor Sara Cowan-Conner.