Act of love - Charity groups work in rain for the kids 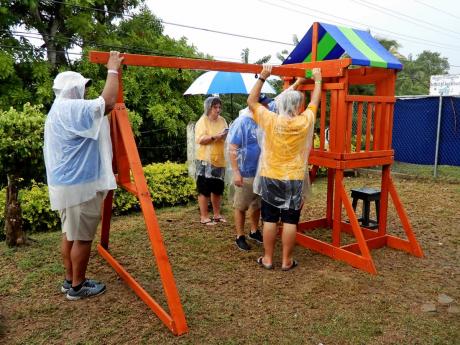 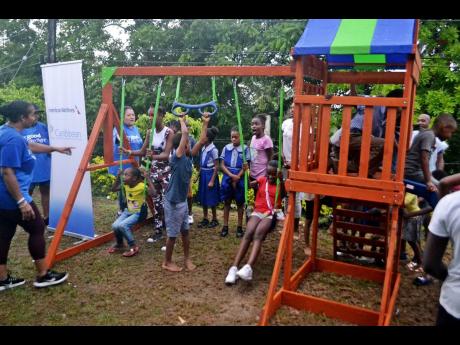 Contributed
Children lining up to use the swings as several American Airlines employees, who had just constructed the facility, look on. 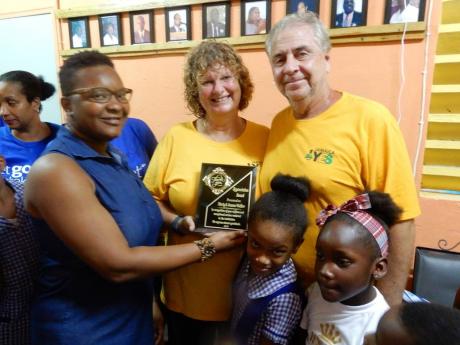 Contributed
Marty and Joan Walker collect a plaque in appreciation for the contribution to Belfield Primary School from Lisan Washington (left) while some of the children look on.
1
2
3

A continuous downpour on Saturday afternoon failed to dampen the enthusiasm of the combined team of charity workers from Jamaica YES and America Airlines (AA) Caribbean Employee Business Resource Group, who erected a wooden playset at Belfield Primary School in St Mary.

The following day, under improved weather, the team, made up of Marty and Joan Walker of Jamaica YES, and the group of employees led by Jerome Bureman, turned their attention to the Jeffrey Town Basic School in the parish, planting three vegetable gardens at the institution.

The team’s act of love at Belfield Primary was much to the delight of the many students and adults who turned out for the occasion. Working through the rain, the team ensured the task was completed in a timely manner and as soon as the rain held up, the kids rushed in to begin enjoying themselves on the new facility.

The group also presented several laptops and school items to the institution.

It was the first time at the school for the AA employees; however, the Walkers have been visiting the school over the last two years and have initiated a breakfast programme there.

Principal Michael Calvert was pleased with the day’s proceedings, describing it as a “significant day in the life of the school”.

“It is really commendable that they have travelled from so far, paying their own airfares and giving of their time and service, and we really appreciate it,” Calvert said.

He continued: “I am sure that the students in grades one, two, and three are going to be very thankful come Monday morning when they have a playground with a slide and a swing. I want to use this medium, on behalf of the entire school family, just to say thank you to both groups, and I hope this will be the beginning of a very, very, very long partnership with Belfield Primary School.”

With a plaque having already been presented to Jamaica YES, the school took the opportunity to present one to the AA employees and the Walkers.

In his response on behalf of the employees group, Bureman underlined that it was a team effort, thanking other team members who were present.

“We’ve come all the way from Dallas, Fort Worth, and it was well worth it,” Bureman said.

Walker, in the meantime, praised Calvert in his capacity as school principal.

“The reason that we’ve had such a good relationship with your school is because of your principal, Mr Calvert. He truly has set the example of what we would like to see all Jamaicans do. He’s very involved, he cares a lot, and his outreach efforts are dynamic,” Walker noted.

On Sunday, several children and adults, including farmers from the Jeffrey Town community, turned out to assist with the vegetable gardens, much to the delight of principal Monica Grandison.

The gardens, each measuring eight feet by four feet, are earmarked for growing pak choi, cucumber, and corn, which will benefit the school’s food programme.

Speaking to The Gleaner on Sunday, Walker said that the two days were well spent working for the children.

“It was rewarding to us, putting together that playground in the rain, just to see the smiles on the children and how they immediately enjoyed it, was so rewarding,” he disclosed. “And today, with the vegetable gardens, a lot of children were there, a lot of local people who also happened to be farmers, they came out to help. We love Jamaica and we love being able to do things like this.”