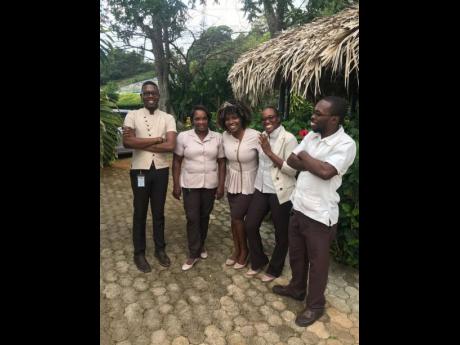 Jackson is still being commended for an initiative she implemented last year that is now yielding fruit and affecting the Chinese business community.

The initiative, which Jackson described as a new approach, was the training of Chinese nationals and their Jamaican workers in an effort to assist them more with functioning effectively and adhering to food-safety requirements.

Before Jackson’s initiative, it used to be a challenge for both the public inspectors and Chinese nationals who worked in food establishments to process their food handler’s permit as well as seeing to it that they effectively adhered to food-safety requirements because of the language barrier.

Jackson and her team decided to take a new approach and train the Chinese nationals and their Jamaican workers in an effort to assist them to meet the standards. The training covered areas of personal hygiene, food protection, solid-waste management, food storage, pest control, general sanitation, deportment, workplace ethics, interpersonal relationships, and also how to deal with the language barrier.

“We have seen great results after the workshop. Various techniques were used to facilitate them, and the results have been great,” said Jackson.

a believer in god

Looking back, Jackson, who is an ardent believer in God, said her whole life was being prepared for what she is doing now.

Before she entered her current field, she recalled getting prepared to attend Mico Teachers’ College in 1996. She bought her uniforms and was all set – except that she couldn’t come up with the tuition fee.

“When I reached there and thought that I would have got money for the tuition, it never worked out. I met a friend who told me that the West Indies School of Public Health was accepting students for the public health course, and that was how I ended up going there for the interview and being accepted. At the time, Government was sponsoring the course at public health school,” she shared.

Looking back, she said that having that major change from not going to teachers’ college opened her eyes to the fact that the Lord had charted a different course for her.

Jackson looks up to her pastor and mentors, the husband and wife team of Pastor Hector and Apostle Jennifer Wynter, who also spoke over her life on the path she would tread.

“Now that I am in public health, I have to believe that it’s God and I am actually walking in my calling,” she said.

Jackson, who hails from Ginger Hall in St Thomas, is a past student of Happy Grove High School. She worked for 13 years in public health in St Thomas before being transferred to St Elizabeth.

She said that those years in St Thomas were a great foundation, being mentored by Charles Lewis and Pauline Ellington.

In 2014, she was transferred to Clarendon, where she has settled and put down roots.

Jackson has been a trendsetter in public health, coming up with one programme idea after the other, and this she credits to God ‘downloading ideas’ for her to push health and safety.

She said that her passion surrounds organisational development, workplace ethics and personality development – things that have an impact on public health.

Jackson, who is big on teamwork, can’t stop gushing over the crew she interacts with from the Clarendon Health Department. She said her ideas would go nowhere without Dr Scarlett Campbell embracing them and being among the first to support the event financially, seeing to it that the workshops were organised; and Linnees Green-Baker, the chief public health inspector who doesn’t allow her ideas to fall to the ground, but is super-supportive.