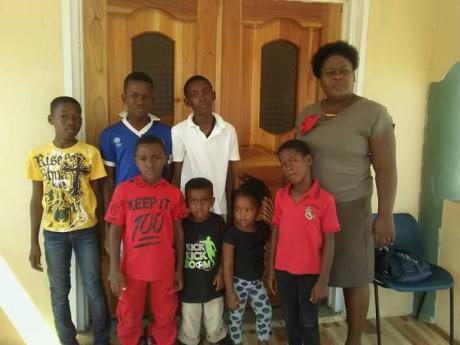 Contributed
Founder of Banks Charity Summer School Programme, Maisilyn Budhoo is pictured with some of the students registered in her summer school programme.

The rural agricultural community of Banks in Clarendon is home to the Banks Charity Summer School, founded in 2012 by philanthropist Maisilyn Budhoo.

Budhoo, who is hailed by her community as a selfless, hard-working individual, said that the charity venture was founded on her love for children and the desire to keep them out of trouble. “The children in my community, they don’t really have anything to do in the summer. They go to goat bush, or they go swimming nearby. I want to try and keep them out of danger.” Budhoo, who describes herself a “charity person”, said she has always had a passion for charitable work. “I have always been involved in charity, but this summer programme is in its eighth year now.”

Budhoo said that 80 children were registered in the programme’s founding year and added that attendance grows significantly each year. She noted, however, that her charitable activities were put on halt this last summer owing to health concerns, noting her intentions to resume next year.

Budhoo’s daughter, Shackeka, said that the programme focuses on teaching children ages five to 17 mathematics and English language. She said; “We had home-based teachers most years, but for the last two years, we had professional teachers who came and taught.” The younger Budhoo added that healthcare providers and law enforcers are also invited to engage in informative sessions with students.

An elated Budhoo shared that the Banks Summer School Programme is at no cost to students. “They don’t have to pay for anything. My sister who lives overseas helps me with funding”, she said. Her daughter added, “Whatever she (Budhoo) gets from her family, she always put some aside for summer periods to go to her summer programme.” She added, “My mother is really selfless; she helps everyone in the community.”

Each year, breakfast and lunches are provided to students at no cost, with end-of-summer activities including banquets, prizegiving ceremonies, and beach trips for the students.

While noting that her mother has had a few discouraging experiences along the way, Shackeka said, “She doesn’t let that stop her from literally doing good in her neighbourhood.”