Growth & Jobs | Money can be made from farming – Brooks 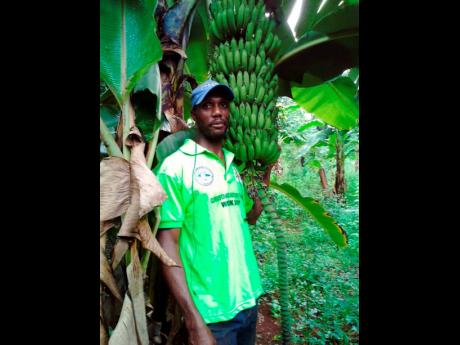 Farming has been the only thing that Donovan Brooks has known. Growing up with his parents, who were farmers, he never thought of another career. He has been tilling the soil for years and eking out a living for his family.

Filled with confidence and determination, he toiled away in the fields at Rock in Osborne Store, Clarendon, managing to make ends meet … until the headache and the negative effects of climate change started to give him more challenges than he could handle.

“What really happen with the change in the system is that we on this side depend on rainfall and for months, sometimes, we don’t have anything. We have to just wait on a little bit of rainfall,” Brooks told The Gleaner.

For him, it is the conviction that money can be made from farming that sees him riding out the storm during the bad times.

Realising that they could not live like that, the farmers’ group approached Central Jamaica Social Development Initiative (CJSD), lead by Damion Young, managing director, for a solution.

CJSD partnered with the Environmental Foundation of Jamaica (EFJ) in developing a project for the farmers in Rock to ensure that they could plant crops all year round.

“Two things worked against the farmers in that area – due to the depletion of trees and the extent to which bauxite has been mined from the lands, it contributed to the removal of shrubs and trees and so forth, and to couple with that, the advent of climate change, the area has started to experience less and less rainfall,” Young pointed out.

He said it was their plight that saw him working with them to write a project to the EFJ, resulting in the farmers benefiting from a grant.

“Now, the farmers are beneficiaries of a massive water-harvesting facility, which is really an earthen pond that is aligned with a particular type of plastic which traps the water,” Young said.

Brooks and the other farmers from the community benefited from a water catchment tank, pumping mechanism to extract the water, and a number of black tanks and agricultural inputs, such as seeds fertilisers and tools.

A relieved Brooks said he is grateful to both Young and the EFJ as he can continues to enjoy the benefits of his profession.

“For those scoffing at farming, I just want to say, money can be made from it. It is not easy, but if you persist,” he said, sharing that he bought a piece of land and is now building his house on it.

Brooks, who does cash crops – sweet pepper, Scotch bonnet pepper, tomatoes, and also some livestock – said he and the other farmers are very excited thinking about their future.