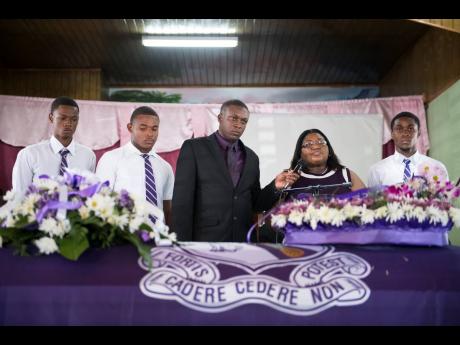 The sweet melodies and music filling the Lionel Town Seventh-day Adventist Church in Clarendon on Sunday did lift the pall of grief hanging over mourners who gathered to celebrate the life of former Vere Technical High and Kingston College quarter-miler Twayne Crooks.

The 23-year-old Crooks, who had also attended the Clarendon-based Denbigh High, as well as the University of Technology, Jamaica, and Southern University in the United States, died on September 1 of stomach cancer.

Crooks’ aunt, Kadian Williams, who said she raised the athlete since infancy, described him as a respectful, well-mannered young man, bearing traits instilled in him by his father, Aldowin Crooks, who was overcome with grief throughout the service.

Twayne, who grew up in Mitchell Town, Clarendon, was hailed as a star in athletics and academia who racked up success on the track while managing to maintain a grade point average of 4.0.

May Pen Mayor Winston Maragh stated that Crooks had done a lot to highlight his community and parish of birth.

Members of the Southern University New Orleans track and field team, of which Crooks was a part until his death, described the Clarendon native as a brother, adding that he was one of the most impactful members of the squad.

“He passed at a time when he was just ready to shine,” said Olympian and member of parliament for West Rural St Andrew, Juliet Cuthbert-Flynn. “Twayne made it clear that his dream was to become a big track star.”

Former Sport Minister Natalie Neita, who is also a relative of Crooks, hailed him as “a hard-working and determined athlete”.

“Twayne’s death comes as a shock to us, and we are all asking why,” shared Denbigh High principal Janice Julal, who added that Crooks was an involved student who never gave up. He graduated from Denbigh High in 2012.

Crooks, who recorded a history of sporting success, represented Jamaica at the 2014 World Junior Championships, where he won a bronze medal in the 4x400m relay.