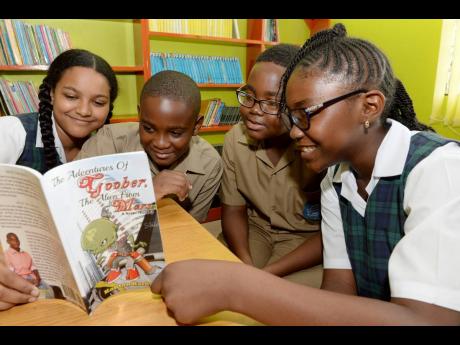 Contributed
Young author Kanton Hardy (second left) and fellow students at Meadowbrook Preparatory School in St Andrew peruse his book, ‘The Adventures of Goober: The Alien from Mars’, at the school recently.

Many children express the desire to be doctors, teachers and lawyers when they grow up, but not Kanton Hardy.

Since the age of eight, he was determined to become an author after being influenced by his ­passion for reading books.

The initial shock to his parents at this unconventional dream at such a young age has turned into a powerhouse of support.

After winning his parents over, Kanton has published his debut book, The Adventures of Goober: The Alien from Mars.

The author, now 10 years old, tells the story of a being who causes unhappiness on his ­original planet by leaving and risking his life crashing to earth.

The 67-page book has received praise from teachers at his school, Meadowbrook Preparatory, and in the wider education sector.

Acting permanent secretary in the Ministry of Education, Youth and Information, Dr Grace McLean, says the parents must be commended for giving Kanton “the opportunity to write this book”.

During a recent visit to the ministry at Heroes Circle in Kingston, McLean told the author, “You are way ahead for you to sit down and actually capture, just by your own little experience, what you have seen, and what you have read about. It is really good and commendable.”

The acting permanent secretary said that his career as a writer has just begun, and the ministry will review the book and seek to endorse it. Thereafter, they will make arrangements to supply it to schools as “an encouragement to other youngsters who want to do the same thing, but may not feel that they have the talent and the capability to do so,” she said.

Kanton’s mother Tavia Bell-Hardy says it was thought that the book would have been ­“simplistic”, but watching him writing from beginning to the end, as she and his father, O’Neill Hardy, cried in amazement.

“It was way beyond and above his years. It was something spectacular. It was God Almighty behind this,” Bell-Hardy told JIS during an interview at Meadowbrook Preparatory School.

She added that they are unable to keep up with supplying books to their son, as he reads very fast, and while they and the teachers at his school have played their part in his development, a higher power is involved in steering him. “It is just for us to do what we have to do to foster his talent,” she says.

Principal Gloria Francis said that from very early, Kanton would read a lot of books and share them with his friends, and was not “afraid to take his books to show me, and ask for others to read”.

She said that students at the institution are motivated by Kanton’s achievement.

“Kanton’s success is a success of the school, and we are extremely proud of him. He will continue to motivate the students here,” the principal pointed out.

Teacher Angela Wright says she observed Kanton in grade one writing several pages of schoolwork, when he was only required to write one page, so it was no surprise that he wrote a book.

“He is very assertive and focused,” she shared, adding that her excitement runs high for her former student.

Another teacher at the school, Norena Braham, says she taught the young author in grade three, and many times she observed that he had one hand on the desk, while the other would be holding a book under the desk that he was reading”.

“Kanton will be going to great heights in his writing,” she said.