The truth about apostasy 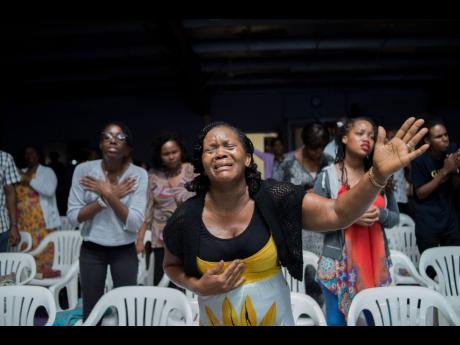 Contributed
Worshippers at the inaugural National Prophetic Summit at the Emmanuel Apostolic Church in Portmore, St Catherine. Lyston says some will receive the word of God with joy, but will retreat when being persecuted.

Based on recent reports in traditional and non-traditional media, there are many popular artistes and church leaders renouncing the Christian faith, including author and former pastor Joshua Harris, and Hillsong leader, Marty Sampson. However, this should not be a surprise since the Bible tells us that in the end of days there would be a great falling away. There are several scriptures in the bible that speak to us about apostasy.

There are many who say they are Christians, but they know they are not. Some are simply camouflaging as Christians, pretending to be a part of the faith, but are like sleepers waiting for the appointed time to rise up, declare their “departure” from the faith, and pull as many souls as they can with them on to the path of eternal death– preparing them for Hell.

If Judas had a foundation, there is no way he would have betrayed Jesus. Judas’ heart did not let go of the things of the world; and the word of God says to be a friend to the world is to be an enemy to God.

As we draw closer to the end of time, we will see many people fall away from the truth of God. We will see false signs, religious deceptions, social and political upheavals, natural calamities, disloyalty and persecution; and sadly, some churches will take a stand to endorse the unclean and sinful things.

We must recognise that apostasy is not something that happens overnight. There are many who call themselves Christians, but God does not have their heart. Christianity is about your faith in Christ – your total allegiance to him (in good and bad times). One cannot have allegiance to both Christ and the world at the same time. How can Christians live like the world?

Every time the word of God is preached or taught, a lot will receive it with joy, but as soon as persecution and trials come, many fall away. It simply means that those Christians did not have any deep roots in the first place. That is why God tends to carry Christians through testing.

The Lord tests his people with the Word first. Then there are other tests he gives – the wilderness test, the patience test – to reveal their allegiance and love for him. That is why the Bible says you must deny yourself and take up your cross daily. You must deny the world and its pleasures. A person who falls into apostasy is someone who refuses to carry their cross daily. Many Christians may comment on how they feel about something, but if it is not in line with the word of God, then they are carnal.

Costly to reject the work of the spirit

Everyone who calls him/herself a Christian must know that regardless of the level of their popularity, or ability to quote many scriptures, that is no indication that God has your heart. Even more so if someone deems him/herself as having knowledge of God, having been a Christian for many years and having ‘been there and done that’. They need to read Hebrews 10: 26 – 31– one of the most solemn warnings against apostasy found in the scriptures.

If someone willfully forsakes Christ, there is no other sacrifice for sin. There are degrees of punishment. If the one who rejects Moses’ law suffers the judgement prescribed in Deuteronomy 17: 2 - 6, an apostate from Christianity will suffer an even worse punishment, for he has treated the Son of God with scorn, regarded his blood as common and unclean, and has insulted the Holy Spirit. So, to insult the spirit of grace implies a rejection of the work of the spirit once it has been experienced.

The book of Revelation tells us what to expect and how things will end. It is not to bring fear, but truth and victory for those who stand in Jesus Christ.

I encourage every Christian who says they are Christians to examine themselves and begin to get or strengthen their relationship with Christ. You are not of the world, you are set apart; so you can’t be like the world. There are many brands of Christianity out there, but we only have one truth!