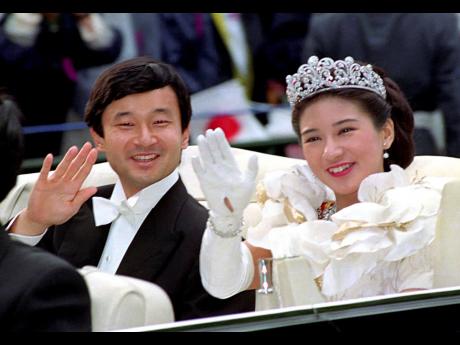 AP
In this June 9, 1993, file photo, then Crown Prince Naruhito and Crown Princess Masako wave during their wedding parade in Tokyo. Japan is abuzz ahead of today’s ceremony marking Emperor Naruhito’s ascension to the Chrysanthemum Throne.

Japan is poised to write another very colourful page in its rich history with the enthronement and thanksgiving rite today in which Emperor Naruhito publicly accepts the reins of power bequeathed by his father, former Emperor Akihito, on April 30.

It heralds the start of the Reiwa, or ‘Beautiful Harmony Era’, and signals an event not witnessed in nearly 300 years. The last time a Japanese emperor abdicated was in 1817, when Emperor Kokaku ceded power to Emperor Ninko.

When news of Emperor Akihito’s abdication as a result of his age and health broke in March, it created a constitutional crisis as the Imperial Household Law designated only the death of the monarch as the condition for succession.

Emperor Akihito had reigned from 1989-2019, which became known as the Heisei, or ‘Achieve Peace Era’. The new emperor is the 126th person in line, including eight females, to head the monarchy.

Under the Japanese constitution, the emperor holds a symbolic position, deriving any power from the will of the people.

Under Article 7 of the constitution, the emperor, with the advice and approval of the Cabinet, shall perform certain prescribed functions.

The new emperor was born on February 23, 1960, and his accession to the throne was on May 1, 2019. He is married to Empress Masako, who holds the honorary position of president of the Japanese Red Cross Society.