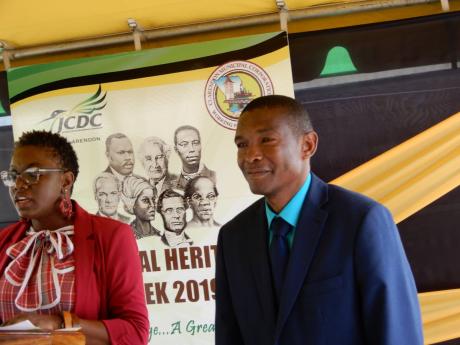 Contributed
Eucal Henry beams with pride as moderator Lisa Ann Holmes Shirley reads the citation before he collects his award at the Clarendon’s Heroes Day Award ceremony, held on the grounds of the May Pen court house, Clarendon.

Centenarian Robertha Falconer of Mocho in Clarendon was among four Clarendon residents honoured by the Clarendon Municipal Corporation and the Jamaica Cultural Development Commission last week.

Falconer celebrated her 104th birthday on January 1. To accept the award at the parish’s annual Heroes’ Day Salute Parade and Awards Ceremony on the grounds at the May Pen Court House on her behalf, was her great-granddaughter, Sydonie Dale, who described Falconer as a hard-working and dedicated person.

“She was a very hard-working person. She was the type of mother who had to work hard for her one and only child,” Dale said.

She said her great-grandmother is a Christian who is still passionate about the church, noting that the Beulah Baptist Church brings communion services in the comfort of the centenarian’s her home.

Falconer is predeceased by her only child, who died at the age of 78. Speaking of the award, Dale said, “I feel good, and I know she (Falconer) will feel good about it too.”

Eucal Henry, a carpenter of Simon district, Rock River in Clarendon was the recipient of one of two Community Involvement awards. Beaming with pride he said, “I’ve been involved in community projects all my life.” Henry currently serves as the chairman of Simon Primary and Infant School board and is the main organiser of back-to-school treats in the Rock River community.

Henry, a member of the Simon Farmers’ Group, was also lauded as the founder of the Simon Senior Citizens’ Club. Henry shared that he was honoured being among the awardees, adding that the gesture was encouraging. “I feel great. If I can help others, then my living will not be in vain. Sometimes it has the downsides, you get discouraged ‘cause sometimes you don’t have the finances to do it. It (the award) encourage me, it gives me another pull to continue.”