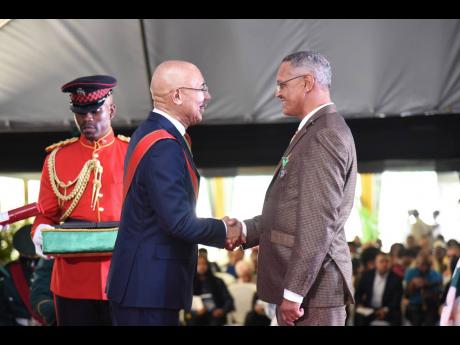 Contributed
Governor General Sir Patrick Allen (centre) presents the Badge of Honour for Long and Faithful Service to the Reverend Paul Neil, for service to Religion and Community Service, at the National Honours and Awards Ceremony at King’s House on October 21.

Growing up in a family that volunteered its time and service to the parish of St Elizabeth made it easy for the Reverend Paul Neil, as a teenager, to decide that he wanted to give back to his community.

For his more than 40 years of dedicated service to religion and community service, Rev Neil was recognised at the National Honours and Awards ceremony, held last month in Kingston.

He was awarded the Badge of Honour for Long and Faithful Service.

According to him, having recognised the value of active service to his community at a young age, he decided to follow in the footsteps of a specific family member.

“My family was always community-oriented, so I saw them always working for the greater good. My uncle was a marriage officer and officiated over 3,000 weddings. He was also a justice of the peace (JP) and a chaplain for a high school in the community, and I wanted to be like him,” Neil said.

Similar to his uncle, Rev Neil became a marriage officer in 2005 and has officiated over 2,000 weddings across the island.

“That was one thing I admired about my uncle’s work, because I believe marriage is a very honourable institution, so I have been happy to marry persons from across the world. My approach to that service is very holistic, as I counsel couples about relationships, forgiveness, conflict resolution and life itself,” he added.

Of his role as a JP, which he has been since 2007, Rev Neil said it has been a learning experience.

“I deal with persons from so many walks of life, and it continues to teach me how to relate to people, no matter where they are from or what they do,” he said.

“I have intervened in situations of civil and political tensions or conflicts between individuals to restore calm. That has taught me that there is always a solution, no matter how big the problem is,” he explained.

Rev Neil said in his various roles, which include being chaplain to the Jamaica Constabulary Force and a minister at the Seaview Baptist Church, his approach to serving is that everybody deserves a second chance.

“No matter what someone may have done in their past, I always believe I must try and help them to a new and different path. I encourage young people by speaking with them, and also showing them how they can advance themselves, so I make a lot of recommendations,” he said.

The St Elizabeth native expressed a desire to see more persons becoming active members of their community and parish.

“I see volunteering and taking on various roles in my community as a way of contributing to its development, so I advise persons, especially the youth, to seek out ways in which they can offer their time to the various organisations that exist in their community,” he said.

Reflecting on his recognition at the National Honours and Awards ceremony, Rev Neil said he felt motivated to continue his work in his community.

“When I heard the news, I felt really good as it not only serves to inspire me to do more of what I am doing now, but I hope it will encourage even one person from my community to volunteer, no matter how small. I hope they will start,” he said.