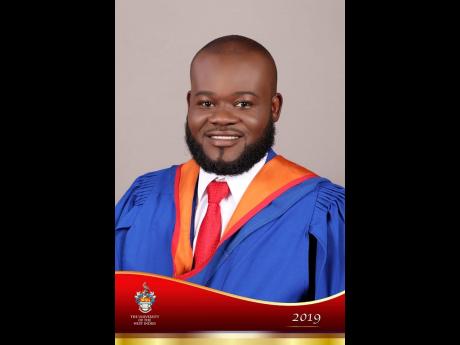 On November 1, Howard Brown received his bachelor of science degree in social work with first-class honours from The University of the West Indies, Mona.

For him, it was a long, hard road punctuated by God’s hands every step of the way.

Losing his mother at the age of 15, Brown felt as if his foundation was removed from under him. Describing her as his rock, he said that in 2001 when she died, he slumped into depression.

“My father, who would have helped to make a difference, was off the island, trying to attain a better life for my sister and me,” he said.

Lacking the kind of emotional support he needed, Brown said on more than one occasion that he thought of ending his own life. He recalled one night while sitting in the dark with a razor, a thought occurred to him to slit his wrist and end his life. He said he is thankful that he did not listen to that voice.

During his last two years at Denbigh High School in Clarendon, Brown endured several panic attacks, nervous breakdowns, and fainting spells that caused him to make frequent visits to the guidance counsellor.

“It got so bad that my grades fell and my average plummeted to just 30 per cent. I was given a letter to take to my guardian with a stern warning of possible expulsion. My father tried his best, but there were several days when we went to school without proper meals and no lunch money,” Brown shared with Family and Religion.

However, through faith, determination and the grace of God, Brown said he eventually turned his life around and successfully graduated from Denbigh with eight Caribbean Secondary Examination Certificate subjects. He said that deep inside, he always knew he was destined for greatness, but he felt demotivated by his humble beginnings.

After high school, Brown got a job and for a while he was so comfortable that the thought of getting a loan to further his education was the farthest thing from his mind. For a moment, he had lost sight of his dream to further himself academically. Soon, negative comments from those he trusted and their projections on his life saw him using them as the catalyst to go back to school to further his education.

not an easy journey

The journey, however, was not an easy one as many times while attending UWI Open Campus in May Pen, he faced the prospect of being barred for non-payment of school fees. The finish line for Brown seemed unreachable.

“I stood my ground and tapped into every inch of positivity and remained optimistic. I finished my degree and was determined that I would continue the journey no matter what,” he said.

Against criticisms and negative comments, Brown said he moved on to do his master of science in social work without having a clear plan as to how he would finance his studies.

“After serving on the guild, I was sure I had garnered all the knowledge and expertise to lead my student body. That election will go down as one of the most vibrant and intensive elections for the GOS Open Campus. I won and was given the chance to lead the charge for students in 17 Caribbean countries,” said Brown, adding that he was terrified about sitting in large rooms advocating on behalf of students as those meetings were filled with the most intellectual minds in the region.

He said that through his leadership, he was able to revitalise the student governing body and bring life to its affairs.

In the final term of his studies, Brown applied and was successful in the UWI Toronto Gala Scholarship, where he was selected to represent all the 2018-2019 recipients in Toronto.

“After sharing my story at the gala, one of the awarded recipients committed to paying for my master’s degree. Following that, I was titled the UWI Toronto Scholar 2019,” he shared.

In an effort to motivate others facing similar challenges, Brown said: “It doesn’t matter your bloodline, the community you are from, difficulties life throws at you. If you keep your eyes on the prize, surround yourself with positive energy and trust God through the process, you can make it.”