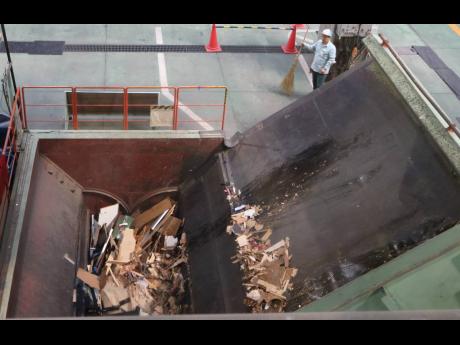 Christopher Serju
A worker at the Tsurumi Recycling/Incineration plant in Yokohama, Japan, monitors operations as oversized garbage is crushed in a grinder.

Yokohama, Japan’s second-largest and most populous municipality, with a population in excess of 3.5 million people, is the capital of Kanagawa prefecture.

Growth in trade and commerce, which quickly propelled Yokohama from a fishing village in 1859, had a downside. As its economy grew, so did the population, bringing an abundance of domestic, commercial and industrial waste.

From just over 500,000 people in 1955 generating 0.12 million metric tonnes of garbage, by 1999 an estimated 3.4 million residents were responsible for some 1.7 million tonnes of solid waste. The city took action and, by 2014, as the number of residents inched closer to four million, Yokohama recorded a dramatic 43.2 per cent decline in solid waste output of 0.8 metric tonnes.

With the Tsurumi combination recycling/incineration plant coming on stream in 1995, it went about setting practical, achievable measures for garbage collection, separation, packaging, storage, and disposal.

Residents put out household waste and recyclables at the 74,000 collection points, each of which serves 10-30 households. Waste is separated by type in transparent/translucent bags and put out by 8 a.m. on collection days.

Garbage collection trucks come in three different sizes, medium with maximum laden weight of 3,000 kilogrammes, small with a carry capacity of 2,000 kilogrammes, and a light-duty dump truck which can carry 350 kilogrammes. Their narrow configuration makes these vehicles ideally suited for collection on narrow streets. All are either diesel-powered or hybrid.

Persons who put out unsorted waste are first given guidance on what to do and, if they persist, are fined. However, the city places greater emphasis on compliance rather than punishment. From all indications, it has worked well for Yokohama and is a standard other cities would do well to emulate.