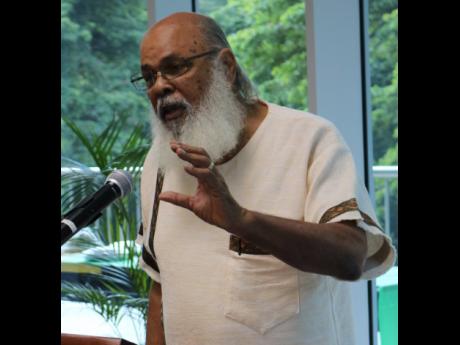 Christopher Serju
Professor emeritus of psychiatry at The University of the West Indies, Frederick Hickling.

Professor emeritus of psychiatry at The University of the West Indies, Dr Frederick Hickling, has taken issue with a recently published report on the condition and treatment of inmates in Jamaica’s adult correctional services.

Through the Cracks – Report on Mental Illness Behind Bars, for which research was undertaken by the advocacy group Stand Up For Jamaica and paid for by the European Delegation to Jamaica, drew the ire of Hickling during last Wednesday’s launch at the UWI Regional Headquarters at Mona.

“The first thing I disagree with has to do with the perspective. You’re gonna get a solution to the problem from abroad – the Europeans and Americans? Their problems are much worse and the solutions that they devise to treat them (mentally ill) are not working, and yet still they try to sell us these techniques?” he queried of The Gleaner.

“Over the last 50 year, since the 1970s, we have been devising our own solutions. Though they’ve been slow, little by little many of them have worked, and the ones that have worked have not been sufficiently funded in order to provide service for everybody,” Hickling added.

In her presentation of the report, board director Danielle Andrade-Goffe said: “When we look at mental illness within our correctional centres, the challenge of tackling this is even greater, given the fact that the state of our facilities requires immediate and urgent attention, and resources allocated to deal with this are oftentimes inadequate. And so we are left with a situation where the mentally ill in prisons have fallen through the cracks.

“Through the Cracks has been prepared against the backdrop that the issues which plague correctional services in Jamaica and put the country at risk of violating basic human rights provisions enshrined in international law, are not unique to us. As such, there is an opportunity to learn and to adopt best practices from other countries.”

Andrade-Goffe explained that strategies looked at included the Canadian Correctional Mental Health Strategy, which focuses on principles of non-discrimination, community-based principles, and continuous care for the mentally ill.

“We also looked at Scandinavian and European models that focused on the community-care model. This model of mental-health care emphasises a need for inmates to be treated within their communities, rather than within an institutionalised setting,” she admitted.

Hickling, who was there to participate in a panel discussion, explained that as a young man in 1973, he visited mental-health hospitals in Naples and they were in worse conditions than Bellevue.

‘Do what works for us’

“The Europeans have not solved mental health problems in their own countries and, therefore, how can they expect to use the models that have not worked in Europe to solve our problems? So, for example, in Italy they had a wonderful movement to move the patients out of the mental hospital, but like all of the European strategies, it was half-cocked. They threw them out on the streets and there was no formal system for them.

“They did it in America and the mentally ill people ended up on the streets, and they did not create a community system to absorb the problem. I’ve worked in these countries, and the people they have thrown out into the streets are ending up in the prisons. The data is replete with the number of mentally ill persons in prisons throughout Europe and all over North America, which is not the case in Jamaica.”

Hickling, who is also executive director of the Caribbean Institute of Mental Health and Substance Abuse, as well as a member of the World Psychiatry Association and who was senior medical officer at Bellevue Hospital in the 1970s and 1980s, explained how the Jamaica model of community outpatient mental-health service delivery has worked well.

“Another mistake that this book makes is that it says Bellevue is the primary agent for the treatment of the severely ill. That’s rubbish! Bellevue only treats 20 per cent of the severely mentally ill people in the society. Eighty per cent of the severely mentally ill people are treated in the general hospitals and the communities all around this country. That’s happening nowhere else in the world and we are teaching the world how to do that. We have developed a system where our acute psychotics are being treated in the medical wards of the general hospitals very successfully. That has happened nowhere else in the world, except Argentina,” Hickling said.