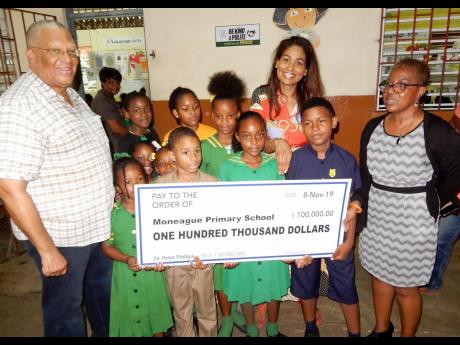 The funds will go towards the school’s efforts to build ramps and other equipment to facilitate disabled persons.

Phillips was on a tour of South East St Ann and took time out to hand over the cheque to principal Patricia Allen.

“This is the primary school I went to and I took the Common Entrance from Moneague, went to Jamaica College and from there on, University of the West Indies and further on, so Moneague is, in a sense, educationally where I started life,” Phillips explained.

“We came to donate something to the school fund to prepare the school to better facilitate disabled students, so we made a small contribution of $100,000 to that fund,” he added.

Allen was grateful for the assistance.

“It was good to have Dr Phillips and his team here today. The school received $100,000, which will go towards ensuring that those persons who are not able, the physically challenged, will be able to access our buildings,” Allen stated.

“For some time now we have been struggling to find funds to build ramps so that all our buildings are accessible, and here is a good chunk to go towards that project.”

Allen said the money will enable some, if not all buildings, to have ramps.The school has 338 students on roll with 17 teachers and other staff.

Meanwhile, Phillips said his trip to Moneague was a good homecoming. He said travelling around South East St Ann, with a delegation headed by MP Lisa Hanna, has shown him several things.

“What we have seen is many people who want, like the rest of the country, to see a greater level of economic activity, to see better plans for agriculture, in particular, facilitated by the Government; who want to see their infrastructure developed, who also want to have a clear sense that there is some stability in life; the price movements and other things that have to do not with the MP, but with the general management of the country, are things that affect them,” Phillips pointed out.

Phillips hailed Hanna, saying she shared a warm relationship with the people in the division.

“There is a sense that together they will work well,” the party president said.