Glenmuir student tops region in RE 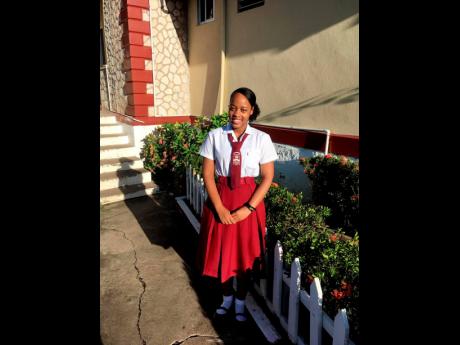 “I can do all things through Christ who strengthens me,” were the words of Glenmuir High School student Akalia Bailey, who is this year’s top religious education (RE) student in the Caribbean Secondary Education Certificate (CSEC) examinations.

Bailey shared that though she was overjoyed at having emerged as the top RE student, the news also came as a surprise. “I really felt overjoyed and elated. It came as a shock to me when I found out that I was the top student in religious education, not just in Jamaica, but in the entire region.”

The 17-year-old, who attained eight grade one passes and a grade two pass in this year’s CSEC examinations, noted that preparation for the external examinations was difficult, but lauded her support system who she said aided her success. “Preparations were hard at times, but with the help of God and the support of my parents, Hopeton and Mertel Bailey, and RE teacher, Miss Barrett, I was able to be successful.”

Bailey’s mother said, “We’re overjoyed and we value this as a great achievement. We wondered sometimes how she really study, waking up minutes to five every morning to get to Glenmuir from Frankfield and reaching home late in the afternoon. It’s really a challenge, but we really give praises to God.”

Principal Dr Marsha Smalling commended Bailey, stating that she worked diligently in pursuit of her goals, demonstrating determination and made a lot of sacrifice. “She abhorred mediocrity and aimed for greatness and the outcome has given us reason to celebrate. We commend her teacher, Miss Tameika Barrett, who prepared her well.”

Noting that a total of 19 Glenmuir students were ranked among the top achievers regionally, Smalling added, “Our students and teachers remain relentless in pursuit of excellence.”