National minimum wage recommendations to be submitted by January 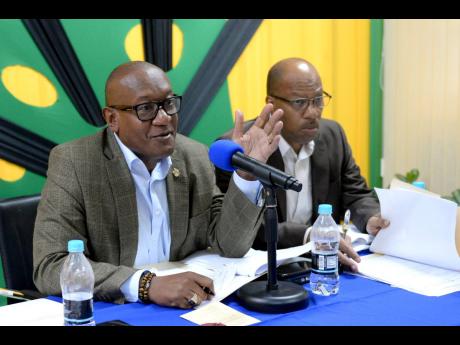 Chairman of the National Minimum Wage Advisory Commission, Dr Ronald Robinson, has said recommendations on the national minimum wage and the minimum wage for security guards will be submitted to Labour and Social Security Minister Shahine Robinson before the end of January 2020.

He said that deliberations on matters arising from the just-concluded minimum wage public consultations are to begin next week, following which a report will be presented to the minister.

The minister will then make a recommendation to Cabinet that will, eventually, go to Parliament for approval.

Speaking on Wednesday following the final public consultation at the ministry’s 1F North Street offices in Kingston on Wednesday, Robinson said the stakeholders, including the trade unions, the workers and the employees, all agree that the minimum wage needs to be adjusted.

“What is unanimous right across the board, both from the employers and from the workers, is that the current minimum wage is inadequate. So I think it is really what kind of increase and what will go into the increases and the percentages and all those things,” he noted.

Robinson said the consultation sessions, which were also held in St James, Manchester, Portland, and St Ann, had “very good representation from a wide cross section of individuals”.

“We have got invaluable information, presentations and recommendations from varying groups that will definitely influence our deliberations in moving forward in preparing that report,” he said.

Dr Robinson said he had hoped that there would have been more involvement from the minimum wage earners.

In June 2018, the Government, on the advice of the National Minimum Wage Commission, announced a 12.9 per cent increase in the national minimum wage from $6,200 to $7,000 per week.