US lawmakers preparing for next phase of impeachment process 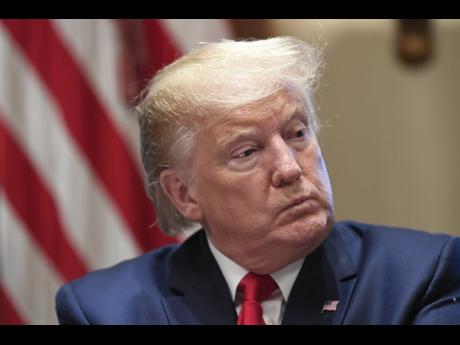 US President Donald Trump during a meeting in the Cabinet Room of the White House yesterday. (AP Photo/Susan Walsh)

WASHINGTON (AP) — Lawmakers in the United States (US) appear to have heard enough.

With nearly two weeks of public testimony largely completed, the US House of Representatives, the Senate and President Donald Trump are now moving on to next steps in the historic impeachment inquiry.

It appears he is going to get one.

Already, employees for Democratic House Intelligence Committee Chairman Adam Schiff and others are compiling the findings of the inquiry.

It is expected that by early December, the Judiciary Committee will launch its own high-wire hearings to consider articles of impeachment and a formal recommendation of charges.

A vote by the full House could come by Christmas. A Senate trial would follow next year.

The impeachment inquiry, only the fourth in US history, has stitched together what Democrats argue is a relatively simple narrative, of Trump leveraging his office for personal political gain.

But Republican say the claim is complex, contradictory and unsupported by first hand testimony.

However, Senate Republicans are already looking ahead to their turn, the January trial that would follow House approval of impeachment charges.

The impeachment inquiry was triggered by a July 25 phone call Trump had with Ukraine’s newly-elected president Volodymyr Zelenskiy.

During the conversation, Trump asked Zelenskiy for “a favour,” which involved investigating Democrat presidential candidate Joe Biden, his son Hunter and a theory — debunked by US intelligence — that Ukraine, not Russia, interfered in the US 2016 presidential election.

In return, Democrats say, it was made clear to Zelenskiy by others that he would get a coveted Oval Office visit.

At the same time, Trump was holding up $US400 million in military aid the East European ally relies on to counter Russian aggression at its border.