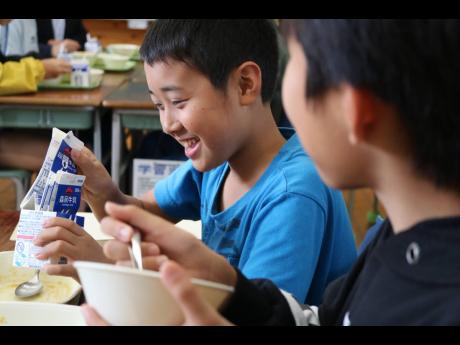 Christopher Serju
This student, who was the smallest and likely youngest person around the lunch table, struggled to fit his box in. No one offered to help and, eventually, a triumphant smile as he succeeds.

Our visit to the Mashiki Chuo Elementary School was well anticipated. Representing, as it did, a break from the rigorous demands of the 2019 Japan Journalism Fellowship organised by the Association for Promotion of International Co-operation in collaboration with the Foreign Press Center Japan, and which this year is centred on the environment and disaster preparedness.

After participating in discussions and presentations about earthquakes, typhoons and flooding with state officials and administrators, I was really looking forward to this less focused and much more stress-free interaction.

The spontaneous welcome we received was heart-warming as the children shouted “hello, hello”, waving enthusiastically and reacting to our responses with squeals of laughter. We were caught off guard by this rich outpouring of childhood joyfulness.

Each fellow was placed at a cluster of desks with five students, and I was fortunate to be seated directly in front of an engaging 12-year-old by the name of Koki. I enquired whether anyone spoke English and was greeted with a raft of smiles and shakes of the head. Then Koki, with prompting from another desk, enquired if I knew Harry Potter, to which I laughed and replied in the negative.

I then tried to tell them I was from Jamaica and mentioned the country’s sprint legend Usain Bolt, at which point Koki asked, “Bolto”?

Before I had finished nodding in the affirmative, he assumed Bolt’s trademark ‘To the World’ pose and, as my face registered shock and confirmation, his face lit up. Now we were really talking.

As I struggled to unwrap the plastic straw to drink my milk, Koki laughed at my awkwardness and gladly took it, being very careful to not let his hand touch it directly.

Koki finished his meal ahead of the rest and then did something which puzzled me. He took his milk box and proceeded to open it in a way which led me to think he was being mischievous. I watched in surprise when another student proceeded to fold his empty box and put it inside Koki’s box. I struggled to make sense of this innocent gesture and then watched in amazement as each student in turn went about crushing their empty box and fitting it inside. When they were finished it amounted to just one box and I watched in amazement as this was repeated across the room.

Our ‘conversion’ continued, and again, I was in for a bit of intrigue when at the end of lunch the children, with military precision, took their trays and went to a table where they stacked the dishes and proceeded to hang the utensils by a hole in the handle I had not noticed before.

They then placed the chairs atop the tables, pushing them to the corner of the room, which was cleared in minutes. I was stunned by the orderly manner in which this was accomplished, having come for lunch but being schooled in just a smidgen of the Japanese learning process.