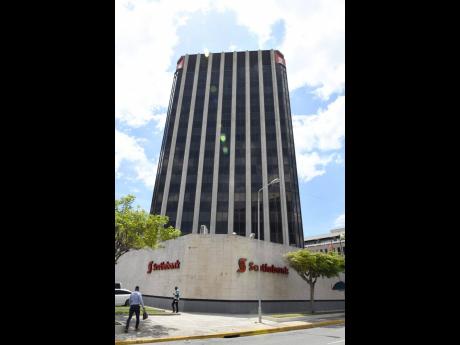 Scotia Centre, the headquarters of Scotia Group Jamaica near the waterfront in Kingston.

A very well-written judgment out of the Supreme Court, recently, is that of Justice D. Fraser’s, in a case brought by Branch Developments Limited t/a lberostar Rose Hall Beach Hotel (Iberostar) against the Bank of Nova Scotia Jamaica Limited (BNS) for the proverbial kitchen sink: declaration/breach of contract/negligence/interest, etc. The case is important because it explores, in great detail, a bank’s responsibility to detect fraudulent cheques, to double-check the veracity of cheques tendered and its ultimate liability to the account holder after it has paid out on the fraudulent cheques.

Between May and July 2007, many cheques were drawn on the said 800438 account and honoured by BNS; however, Iberostar contended that 75 of the cheques honoured were fraudulently prepared by two of its employees who had forged the signatures of two senior employees. The sum paid out by BNS in pursuance of these forged cheques was $34,439,841.00. Iberostar, therefore, claimed against BNS to recover the monies paid out on the account, to which BNS responded that it was justified in paying out the $34,439,841.00 based on established principles of law as well as the terms of the agreements between the parties.

Having explored seven issues along the way, as indicated before, this was a beautiful, lucid, cogent judgment by Justice Fraser. His Lordship ultimately found in favour of BNS – another big win for Michael Hylton, QC, who represented the bank. In brief, His Lordship found that BNS had not breached its agreements with Iberostar and also had not been negligent in paying out the sums on the offending cheques.

An issue tackled early in the judgment was whether BNS had sufficiently explained the terms of the contracts agreements relevant to the bank accounts in question to the managers who signed the agreements on behalf of Iberostar, especially as English was not their native language and the contracts were written in English. The following extract from the judgment effectively summarises His Lordship’s finding on this issue:

“Applying the principles from Manor Windsor Realty Ltd, I agree with counsel for BNS that Iberostar has not shown that the circumstances gave rise to a fiduciary relationship between itself and BNS. Therefore, only a commercial relationship was formed between Iberostar and BNS. BNS was accordingly entitled to put its own interests ahead of any conflicting interests of Iberostar, and had no duty to explain the nature and effect of the clauses.”

Effect of Forgery Clause in Agreement

This issue turned on whether BNS could rely on Clause 9 of the agreements signed between the parties. The clause in question precluded the bank from being liable to the customer for any loss due to a forged or unauthorised signature made by an employee or representative of the customer – as in the case at hand. In this regard, Lord Fraser found that the clause in question did not offend the law. Borrowing dicta from the well-known case of Tai Hing, Justice Fraser noted, “it is always open to a banker to refuse to do business save on express terms”.

Under this heading, the systems and controls put in place by Iberostar to detect fraud were carefully scrutinised by Justice Fraser and found wanting:

“It is, therefore, manifest from the evidence and a consideration of Manor’s case, that in breach of Clause 9 a (i) and (ii) Iberostar failed to 1) maintain systems and controls sufficient to prevent and detect fraud, and 2) monitor the conduct of its employees who were the alleged fraudsters.”

Further, Justice Fraser also did not find – as contended by counsel for Iberostar – that the wording of the “forgery clause” (Clause 9 a (i)) was either unreasonable or ambiguous:

“The Canadian cases which I find highly persuasive have upheld clauses very similar to Clause 9 that exempt banks from liability where cheque forgery is carried out by an employee of the business that has suffered loss by the bank honouring a fraudulent cheque. I, therefore, see no basis to hold that Clause 9(b) is either unreasonable or ambiguous. The combination of the fact that the alleged fraudsters were employees of Iberostar and the previous finding that the systems and controls referenced under 9(a) were inadequate to prevent fraud provide an insuperable hurdle to the claim for breach of contract…”.

Another important issue addressed by Justice Fraser in his judgment was whether BNS could rely on the clauses of the agreements between the parties which, in essence, stated that bank statements sent to customers must be challenged within a short window of time, failing which, it would be accepted that the statements were accurate, the cheques tendered were valid and the customer had no further recourse against the bank in respect of the entries shown in the said statement.

On this issue, Justice Fraser found that Clause 7 of the 2007 agreement in the instant case, which established Iberostar’s responsibility to examine its statement of account and all cheques and vouchers, and to notify BNS in writing of “any errors, omissions therein or therefrom, or any challenge to the contents of or balance shown on the statement” did not go far enough to cover forgery, and as such BNS could not rely on that clause to avoid liability. Fortunately for BNS, it did not need to win on this clause also, as it had already succeeded in avoiding liability based on the “forgery clause”. The clear inference is that had the wording of Clause 7 been sufficiently wide and focused to extend to forgery, then BNS would have been able to also rely on this clause. However, the wording in the relevant agreement had fallen short of the mark.

While the above case represents a big win for BNS and banks in general, it is nevertheless a judgment for all to note, both bankers and their customers alike.

Shena Stubbs-Gibson is an attorney-at-law and legal commentator. Send feedback to: Email: shena.stubbs@gleanerjm.com Twitter:@shenastubbs. This column is printed every other week.