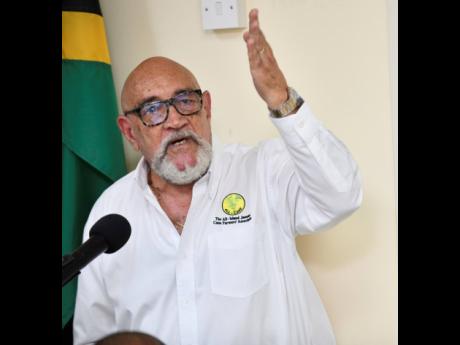 Immediate past president of the All-Island Jamaica Cane Farmers’ Association (AIJCFA), Allan Rickards, has advised sugar cane farmers to demand real fixes for the industry and not to be swayed by election promises, given the failure of the agriculture minister to outline a plan for the sugar cane industry going forward.

His warning came during the recent 70th annual general meeting of the AIJCFA at the convention centre at the Denbigh Showground in Clarendon.

“Don’t allow a delay in dealing with the problem simply because it is convenient for things to be dealt with after an election and not before.

“In the meanwhile, you have promises of this, promises of that, and the latest nonsense is about the factory being divested, which people are developing a hope about. This cannot be delayed over the time that allows for an election to be held, given the cold, hard facts facing the industry,” he charged.

There was a spontaneous applause as farmers shouted, ‘True, sah.” Rickards was speaking about the Monymusk Sugar Factory in Clarendon for which an enterprise team set up early last year to review divestment options has failed to meet.

The farmers turned out in their numbers in eager anticipation of hearing from Minister of Industry, Commerce, Agriculture and Fisheries Audley Shaw. They wanted to hear about plans now that the industry has been reduced to production of sugar at only three factories – Worthy Park in St Catherine, Appleton in St Elizabeth, and Frome in Trelawny – but were disappointed at his absence.

The communications arm of the ministry had advised that Shaw would have been present at noon, but he did a last-minute switch and, instead, attended the official signing of a management agreement between local company the Amaterra Group and Marriott International at the Hard Rock Cafe in Montego Bay, St James.

Director in the Strategic Planning Division of the Ministry of Industry, Commerce, Agriculture and Fisheries, Delroy Coley, got a frosty reception after reading a speech prepared for Shaw, when he admitted that he could not provide definitive answers to any of the farmers’ questions.

Minister without portfolio in the industry, commerce, agriculture and fisheries ministry, J.C. Hutchinson, was represented by Dr Omer Thomas, while State Minister for Agriculture Floyd Green was also absent.