The bold men of MoDA 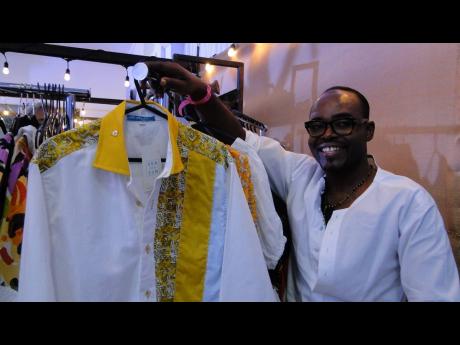 Paul Williams
Andre David from Haiti, with some pieces from his line ‘Sea, Sex, Sun’.

MoDa Market is an annual three-day showcase that pitches itself as ‘the shopping playground of the stylish’. From the understated to the exquisite to the ostentatious, it can be seen and bought at MoDA, a must-attend event for many.

And from Friday, November 22, to Sunday, November 24, the stylish and not-so-stylish were out in their numbers inside the Spanish Court Hotel’s Worthington, which was transformed into a pop-up marketplace like none other. From the tiny earring to the lapel pin to the bling, they were all there.

Most of the items on sale were made for stylish women, and there were some very stylish women in the house. Nonetheless, the men also made their present felt. They went to MoDA with their bold, bright, and brave selves and attracted a variety of feedback, from the “No, sah!” to open-mouthed “Wow!”

The tag line for Andre Stephen’s line – Premier Gentleman, is ‘Be Bold. Be You. Be Premier’.

His jackets, especially, are against the grain as they are mainly made of patterned and/or coloured fabrics that are juxtaposed in the most unconventional of ways. Different textures, patterns, and colours are stitched together to create unique designs.

The intention, he said, is to bring out that boldness from the “reserved gentleman”. He wants to change the “mindset of what should be”, and he is using fashion to get men to be prepared for the “transition”. It is a movement, he said, and it has inspired much conversation about what fashion is, what it was, and what it will be; thus, some of the pieces have a “futuristic touch”.

The creative director, that he is, wears his own suits almost every day, because, he says,“When you want your brand known, you have to make people see what you wear... court attention at all costs.”

And for the reserved gentleman, who might be afraid to be bold, he advised, “Have a sense of appreciation of who you are, just love yourself.”

Germain Smith loves to represent himself. He was born in Jamaica, but now resides in the British Virgin Islands, where he says his fashion line, KYM’ASIA, is ‘10 and a half out of 10’, in terms of popularity. It was his first time as a vendor at MoDA, and the outfit he wore complemented his line of black-and-white “high-end” couture and pageant dresses.

The fashion designer/consultant, making reference to his dotted long-sleeved shirt and black-and-white striped pants, said, “As a fashion guru and a personal stylist, I have to set a different record in fashion. When I step, my career has to be shown in my attitude. That is the reason why I look the way I look today.”

Carlton Jones, too, has his own line, CARLTON JONES, which he says is inspired by his growing up on the coast of North Carolina. He has been a stylist for almost 30 years and has been designing his own pieces for the past five years. This was his fourth time at MoDa, but he says he has visited Jamaica more than any other country.

On Saturday, one of the pieces he wore, he called a “gender-fluid wrap pants”. He says they are his bestselling pieces. When asked whether he thought the Jamaican man was ready for the design, he replied, “I think so, because it is inspired by the sweatpants, though a little more stylish than other sweatpants.”

From the United States, there was also Bruce Brown. The fashion stylist from Dallas, Texas, donned an outfit that he described as “a comfortable two-piece high-fashion gold metallic romper” that represents his sense of style. It was another get-up that forced the question: “When do you believe Jamaican men can dress like this without fear or favour of the crowd?”

Brown’s nonchalant response was: “As soon as they break out of the stereotypical explanations of society and just enjoy clothes. There is no specific colour, specific type of material, no specific wear as it relates to gender, so you wear what inspires you, and you wear it confidently, and it sells itself.”