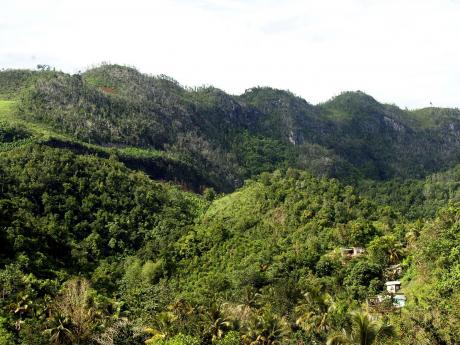 A view of a section of the Cockpit Country - File photo

Residents and environmentalists on Thursday reiterated their opposition to mining in the Cockpit Country, underscoring that they will strongly resist any attempts.

The issue was ventilated a town hall last evening at the Webb Memorial Baptist Church in Trelawny.

“Mr Prime Minister, are you going to bring out the police and soldiers to kill your people when we stand against mining?” questioned environmental activist, Esther Figueroa.

Community and environmental groups and players in the bauxite sector have been at odds over mining near the boundary of the Cockpit Country.

The protected area boundary was declared in October 2017 and Noranda made an application for Special Mining Lease 173 - an area adjoining the boundary - in August 2018.

The company owns more than 50 per cent of land in the mining area, but it has said that it plans to utilise only 15 per cent of the acreage.

Groups opposed to the mining have declared that the area should not be disturbed.

“Digging up for bauxite is insane and suicidal. Mr Prime Minister, are you going to bring out the police and soldiers to kill your people when we stand against mining? Withdraw the Mining Lease 173 immediately."

Hugh Dixon, executive director, Southern Trelawny Environmental Agency
“We must at all cost protect the Cockpit Country. There should be no mining in Cockpit Country now. It is bauxite now, but later it will be our limestone, which is the most valuable in the world."

Noveline Campbell, a resident of Alps
"The farmers need the land to provide food for the nation as they have been doing for generations. The water which all of western Jamaica depend on will be no more. Leave the Cockpit Country as it is!"

Tiana Huie, a student of Westwood High School
"I am looking to a life of enjoyment of nature undisturbed."

Maurice Levermore, a deacon at Webb Memorial Baptist Church and a resident of Stewart Town
"From the experience of what happens to the lives of people after mining in their area, it is not something I am looking for. Why would a Government want to earn from an activity which will expose the population of deteriorating health, as a result, associated with the dust nuisance associated with mining."

Dr David Smith, Coordinator, Sustainable Development Unit - University of the West Indies, Mona
“There are two places in Jamaica with resources found nowhere else in the world. I speak of the Blue Mountains and the Cockpit Country. A key resource is water. Scientists have not been able to find a substitute for water. Every hotel in western Jamaica use water which originates in the Cockpit Country. The electricity from the Rio Bueno Jamaica Public Service Plant depends on water generated from the Cockpit Country. Bauxite is a finite ore when that is over, what is next? There is a Mining Act of 1947 which is in desperate need of being brought into the 21st Century."