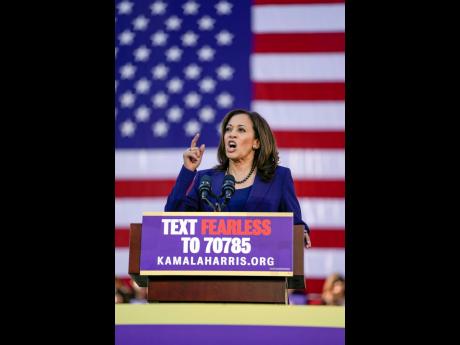 AP
In this January 27, 2019, photo, Democratic Senator Kamala Harris formally launches her presidential campaign at a rally in her hometown of Oakland, California.

Jamaican expatriates have generally reacted with dismay to Democratic candidate Senator Kamala Harris’ decision to pull the plug on her presidential election race, but some believe that the pragmatism of money in politics and her failure to energise black voters ultimately cost her the campaign.

Harris, who has paternal roots in the northern Jamaica community of Brown’s Town, St Ann, announced on Tuesday that she was withdrawing from the race for the 2020 elections, primarily on financial grounds.

“I am not a billionaire, and my campaign for president simply does not have the financial resources we need to continue,” Harris said in a statement issued to her supporters.

Although the announcement was not a shock to many political watchers because of Harris’ sagging poll numbers, US-based Jamaicans like New York City musician Desmond Moulton and marketing specialist Alison Ross have expressed disappointment at her exit.

Ross, who is also a New Yorker, said that Harris’ exit was inevitable.

“The writing has been on the wall for some time,” Ross told The Gleaner. “Quite frankly, the likelihood of a second African American president being elected, particularly in light of the backlash against the Obama presidency, was pretty remote,” she argued.

When The Gleaner contacted Congresswoman Yvette Clarke, Democratic member of the US House of Representatives who is also of Jamaican heritage, for a reaction, her communications director’s reply was curt.

“Since the congresswoman has made the choice to not currently endorse in the presidential primary, she’s also not commenting on candidates who leave the race,” the director said.

Harris’ departure, as the only woman of colour, has eroded the diversity of the Democratic field, which is overwhelmingly white, male and wealthy.

After a spectacular launch in Oakland, California, in January, sparking hopes of tapping support from multiracial voters in the post-Obama era, Harris’ fast-starting campaign sputtered in the face of more progressive candidates like Senators Elizabeth Warren and Bernie Sanders and the ascendant Indiana Mayor Pete Buttigieg.

Inevitably, Harris was a casualty of horses for courses.

Further afield in Lexington, Kentucky, Dr Horace Bartilow, author and professor of international political economy at the University of Kentucky, was more generous in his analysis.

“The suspension of Senator Harris’ campaign should not come as a surprise to the careful political observer. She occupied a very crowded lane for the moderate wing of the Democratic Party,” Bartilow, who is also Jamaican, reasoned.

“Kamala was competing for the same financial donors and her message and appeal could not be distinguished from other moderates such as former Vice-President Joe Biden, who had greater name recognition among the donor class. Harris had one or two shining moments during the debates, but since then, her numbers languished in the single digits and her donor dollars dried up.”

But despite the let-down, some Jamaicans in the US are nevertheless tremendously proud of Harris’ accomplishments thus far.

“I think all Jamaicans should be proud that one of our offspring took on the challenge to become leader of the free world,” Gary Foster, a former aide to entertainment mogul Russell Simmons, shared.

“Her journey is just beginning and she will now turn her energies towards the Senate where she may prove very useful to sway opinion in the upcoming impeachment trial,” he added.

On the West Coast, in California, Jamaicans had their opinions, too.

Juliet Elliott Murphy, the president of a career-development company, thinks this is the opening act and not the closing chapter for Harris.

“The departure is disappointing, but what I embrace is the fact that she was bold enough to run. She is a force to be reckoned with, so consider this round one. She is young, powerful, she can regroup and I think she will be back stronger than before.

NOT JAMAICAN OR BLACK ENOUGH

Still, not all Jamaicans are presenting bouquets of sympathy to Harris, who enraged her father Donald Harris, with whom she has strained relations, when she joked about marijuana smoking as a pastime of islanders.

“I never felt Harris identified with Jamaican and Caribbean people as a key part of her base,” Trevor Smith, president of Tower Isle Patties, revealed. “She never understood the power of West Indian Labour Day Carnival nor the value of visiting black neighbourhoods in Brooklyn and Atlanta, and elsewhere. Despite invitations, she never accepted, so I was not surprised the end came so early. But I love her fighting spirit and I think she will be back.”

Pat Shields, a California resident, agrees that Harris will be back.

“It is easy to point fingers at what went wrong, but what is not in question is that she is a passionate fighter like Nanny, our national heroine. I hope that her passion will unite the Democratic Party behind a strong candidate who can defeat the present administration and ultimately unite this country.”