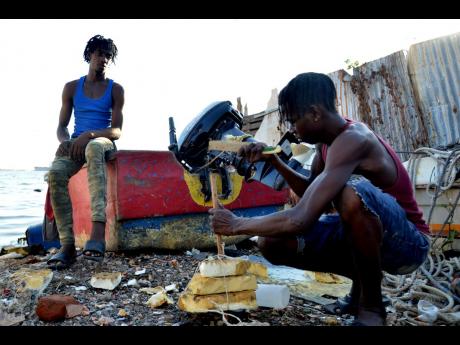 When Ricardo Williams and Jahvon Evans first took to the sea on their own at age 14, the two could hardly see over the bow of the narrow fishing vessels they secretly ‘borrowed’ while their elders slept at the Rae Town Fishing Village in Kingston at nights.

That was seven years ago – long before they had left high school, and before the authorities began more strict clamping down on illegal fishing on Jamaica’s coastlines.

Those treacherous voyages – navigating the Kingston Harbour night tide from sheer memory and guts – turned them into men, they said.

They also enabled them as teenagers to earn a living, sometimes up to $20,000 per fishing trip, while sidestepping the lures of criminality rampant in central Kingston’s toughest enclaves.

To them, it was only natural that they ended up fishing for a living after growing up on a fishing beach.

“Me father was never into fishing but me get into it because me born and grow a seaside. Me nah go tell you that we haven’t tried anything else. We try a whole heap of things, except to thief and rob. But them things there don’t work out so we just say make we try the sea because we had who to help we,” he said, recalling the long nights he and Evans spent at sea, hoping to quickly make a catch before fishermen realised their boats had been unhooked from the beachfronts.

Williams said that during his childhood, his mother lived overseas while his father was incarcerated, and so his interest for school waned. He, however, managed to secure grade IIs for mathematics and English language at the Caribbean Secondary Education Certificate (CSEC) level, and hopes to become a mathematician one day.

For now, however, nothing is more fulfilling than cashing in from a catch at sea after navigating the night waves with his long-time friend.

“Me always dream fi say me want to teach maths. If it is even a primary school, high school, or college, but I want to reach the highest level in it,” said Williams, who smiled at the prospect of retiring from fishing any time soon.

“Unlike the man in the office, me get fi chose when me agguh work … . Nobody can say ‘you have to come work tonight’, and if we go work tonight, we can say ‘yes, we can build back, we don’t have to go back out for the week’,” he continued.

The two smiled two weeks ago as they prepared their nets, buckets, and fishing supplies for a two-night fishing voyage. Unlike in their teenage years, when they snuck out using memory as their guide, the two now have GPS to help them mark the most lucrative spots.

They are among the youngest fishermen in Rae Town, and they use floating lanterns made from flashlights affixed to foam to illuminate and mark their work area in the darkness of the Caribbean Sea.

“We a do this from long time, from youth days. It is something weh we love to do. We know the sea can get dangerous still, but we used to it. You have to just learn the ropes,” offered Evans, who said his father first threw him off a boat at eight years old.

Evan’s father, Derrick Evans, said for many youngsters living on the seaside there is no alternative.

“Is a whole heap of time them try get things, pictures and so, fi get a security job … and it turn out them in a line and can’t get nuh call. So it force them now fi come a sea and see the trade weh me a do, and him get fi love it,” he said, adding that fishermen at times spend long nights away from home and some feel their children are more protected around them.

“Some parents rather carry the youth go sea than leave him by himself at home; and it (fishing) is important because after school, there is really no way out for many of them youths here,” Evans argued.