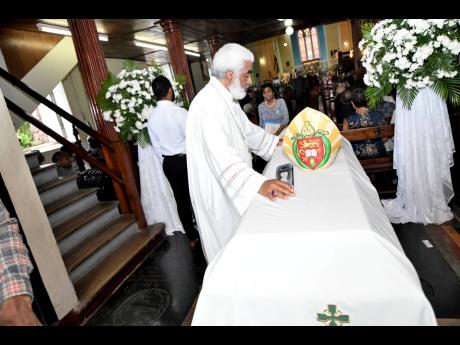 Rudolph Brown/Photographer
The Reverend Dr Robert Thompson pays his respects to the late Reverend Dr Alfred Reid at the mass of resurrection for the retired Bishop of Jamaica and the Cayman Islands at the Cathedral of St Jago de la Vega in Spanish Town, St Catherine, yesterday.

The Reverend Dr Alfred Charles Reid was eulogised at his funeral yesterday as a man of courage, full of humility and grace.

Hundreds of mourners turned up at the Cathedral of St Jago de la Vega in Spanish Town, St Catherine, yesterday to remember the late Anglican bishop, whose life, they said, “was not simply a task, but a mission” he undertook until his passing.

Reid, the 13th Bishop of Jamaica and the Cayman Islands, died last Monday at his Manchester home. He was 82.

Suffragan Bishop of Kingston, the Reverend Dr Robert Thompson, said Reid held firm to the Anglican and Caribbean traditions and that he believed that the Church should pay attention to the post-colonialism period in representing the people.

“Bishop Reid made use of the traditional values in the society. He was a treasure trove on matters pertaining to the church’s history. It is regrettable that he died,” Thompson said.

“And we must thank God he took others with him on that mission and now we must bid him farewell,” he added.

Thompson said that although the bishop’s departure brings pain to the family, especially widow Gloria, to whom he was married for more than 50 years, those who know him should take comfort that he died a good death.

“All of us desire a good death, but not all of us are given that privilege,” said Thompson.

Thompson said that what made Reid unforgettable was that he never lost sight of his common humanity, adding that although the bishop was a prince of the church, he was never pompous.

Further, he said Reid belonged to a generation that believed in themselves and in their ability to make a difference to the greater national good.

Reid was elected Diocesan Bishop on December 12, 2000, in succession to the late Bishop Neville DeSouza, and was enthroned in the Cathedral of St Jago de la Vega on January 25, 2001, where he served until his retirement in December 2011.

He was conferred with the Order of Jamaica in 2005 and was also bestowed with an honorary Doctor of Divinity from the Episcopal Divinity School.